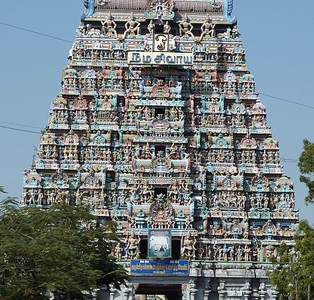 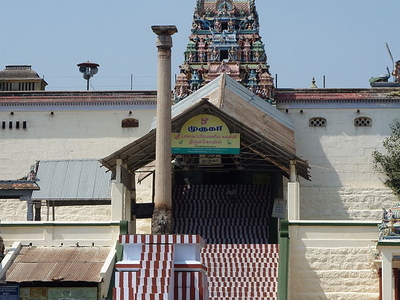 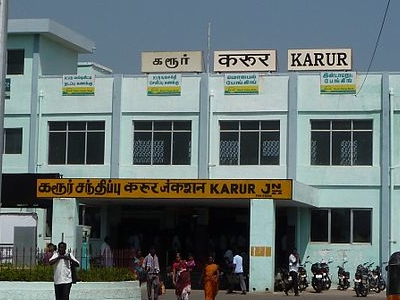 Karur (Textile Capital of Tamil Nadu) is a town, municipality and head of the Karur district in the Indian state of Tamil Nadu situated on the banks of Amaravati. Karur district was formed on 30 September 1995 by trifurcating Tiruchirappalli district. It is the administrative headquarters of Karur District. Karur has a very long history and has been sung by various sangam poets. It has been the battleground of various Tamil Kings like Chera, Chola and Pandya because of its strategic location in Kongu Nadu. The district has a very rich and varied cultural heritage. The town and the country side is made fertile by the perennial flows of the Kaveri River on the northern side (Thavittupalayam, Vangal, Muniyappanur, Kattalai (confluence of Kaveri River and Amaravati River) Mayanur, Kulithalai) and also the Amaravati, Nalkasi, Kudaganar and Noyyal rivers. The area is famous worldwide for its hand-loom textile products.

Arts, Society & Culture:
The town formed a part of the traditional Chera and Chola empires and has a number of exquisitely sculpted temples. Verappur, a place of pilgrimage connected with the history of Ponner-Sankar and temples dedicated to them is situated in Karur district. The people are very happy and unity among themselves Pongal, Tamil New Year, Aadi Perukku, Vaikunta Ekadasi, Annual festival at Veerapur, Annual festival for Karur Mariamman are some of the important festivals celebrated in Karur.

On the international textile map Karur has become synonymous with hand-loom “made-ups” like Tirupur is known for the hosiery product. Hand-loom Exports from Karur began on a modest scale with just 15 exporters in 1975 and today Karur has thousands of exporters and the products are supplied to World leading chain stores like WalMart, Target, IKEA, JC Penny, Ahlens etc...People say in shot this city as 'Mini Japan' in terms of employment.

Karur textile Park Ltd(KTPL):
Set up under the Scheme for Integrated Textile Parks, the Rs. 130 crore sophisticated project christened Karur Textile Park Limited (KTPL) is rated the premier facility of its kind anywhere in the country for its technical and ancillary facilities in a united complex spread over 110 acres in Thalapatti and Puthambur villages, about 12 km from here off the Karur-Madurai highway NH7. An executive administration block, a full-fledged bank branch with ATM, a hospital, pharmacy, restaurant, department store, readymade shop is a part of the park.

Here's the our members favorite photos of "Towns & Villages in Tamil Nadu". Upload your photo of Karur!

Going to Karur? Get answers from our friendly locals