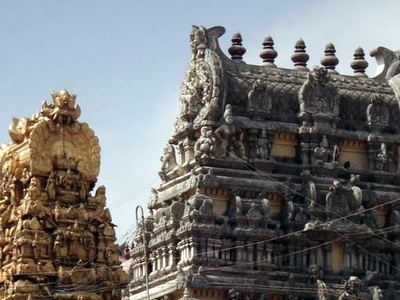 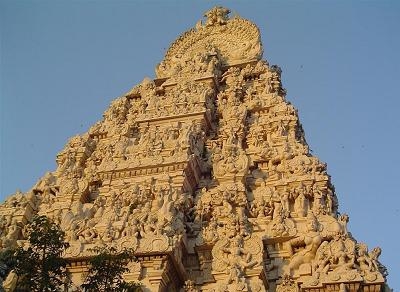 The Kamakshi Temple is a famous Hindu temple dedicated to Kamakshi, one of the forms of the goddess Parvati. It is located in the historic city of Kanchipuram, near Chennai, India and is popularly associated with Sankaracharya, one of the greatest Hindu gurus. The Meenakshi Temple in Madurai, the Akilandeswari temple in Thiruvanaikaval near Tiruchirappalli and this Kamakshi are the important centers of worship of Parvati as the mother goddess, in the state of Tamil Nadu. The temple was most probably built by the Pallava kings, whose capital was Kanchipuram, around 6 C.E.

The main deity, Kamakshi, is seated in a majestic Padmasana, an yogic posture signifying peace and prosperity, instead of the traditional standing pose. The goddess holds a sugarcane bow and bunch of flowers in the lower two of her arms and has a pasha (lasso), an ankusha (goad) in her upper two arms. There is also a parrot perched near the flower bunch. There are no other Parvati temples in the city of Kanchipuram, apart from this temple, which is unusual in a traditional city that has hundreds of traditional temples.

Festivals:
Four worship services are offered each day. The annual festival falls in Spring, in the Tamil month of Masi, which runs from mid-March to mid-April. During this time the chariot festival (Ther) and lake festival, (Theppam) are held. Other festivals include Navaratri, Aadi and Aippasi Pooram, Sankara Jayanthi and Vasanta Utsavam in the Tamil month of Vaikasi. All Fridays are considered sacred, though the Fridays in the Tamil months of Adi (mid-July to mid-August) and Thai (mid-January to mid-February) are celebrated.

The Acarya changed the fierce form of worship into a sowmya form. The Devi in this original Kamakshi temple is called by various names like Kirtimati, Devagarbha in extant Tantric works like Tantrachudamani. She has four hands containing in each of them respectively, Ankusa, PAsa, Abhaya and a Kapala. This description corresponds to those extant old tantric works. Further, Girvanendra Saraswathi describes precisely this swaroopa as Kameswari. Sundaramurthi Nayanar, the Saiva saint of the 12th century is aware of the Kamakottam. He in fact mentions that the Kamakottam has come in existence just at that time.

The Modern Kamakshi Devi Temple at Kanchi:
The Siruthondar Puranam of Sekkilar Peruman, written during this time, is aware of both the temples and mentions the original temple as the Yoga Peeta and the present Kamakshi devi temple as Bhoga peetam. The reference to the present Kamakshi Devi as Aram Purappaval (bestower of boons)by Sekilar Peruman is noteworthy, as the present name of the street in which this new temple is located in Kanchipuram is called Arapanak Ara Theru.

The present Kamakshi temple too, has a Sri Chakra which was established during the 16th Century by NrusimhAdvari, of the famous dathamAnji family. There is a stone inscription inside the new temple, near this Sri Chakra, which states this fact. It is noteworthy that Arunagirinathar a 15th Century Tamil Saint, sings in praise of the Goddess as devi of dark emarald complexion and the mother of Muruga of Kumarakottam. The Original Kamakshi Devi temple i.e. Adi PeeteswariKamakshi Devi temple is just adjucant to the Kumarakottam. Arunagirinathar mentions the Sri Yantra in the Kamakshi Devi temple, which can apply, during the 15th century, only to the original Adi Peeteswari Kamakshi Devi, which contained the Sri Chakra installed by Adi Shankara. Arunagirinathar does not make any reference to the new temple.

Also noteworthy is the fact that this new temple's legend considers the Bangaru Kamakshi at Thanjavur as Dharmadevi This is the metallic counterpart of the stone image of Dharmadevi, which is at present at Thiruparuthikunram (Jina Kanchi) to where it was removed from this present Kamakshi (Tara Devi) temple after the conversion of the Jain Tara Devi temple into Hindu Sakta tradition has become stronger. There is a stone inscription at the Jina Kanchi temple which explains this fact. There are strong evidences that Dharadevi was worshipped in the present day main shrine.

Tirukkalavanur:
In the shrine of Kamakshi Amman close the sanctum, the Tirukalavanur Divya Desam, the temples dedicated to Lord Vishnu glorified by the 7th-10th century alwars (Tamil saint poets) is present. The temple faced west went to ruins and the deity is now placed inside the Kamakshi Amman temple. There are shrines over the vimana.

Other Famous Kamakshi Temples in Tamilnadu:

Here's the our members favorite photos of "Temples in Kanchipuram". Upload your photo of Kamakshi Amman Temple!

Going to Kamakshi Amman Temple? Get answers from our friendly locals

Ronnie S is the only Touristlink member to visit Kamakshi Amman Temple. Have you been here? Click here to save it.