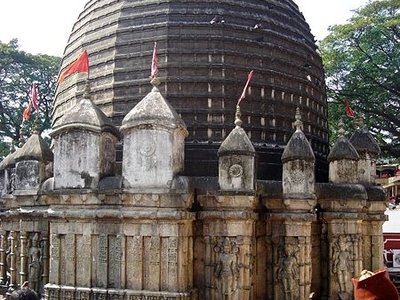 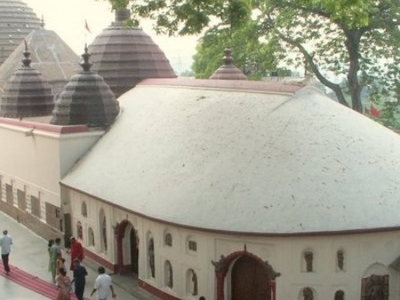 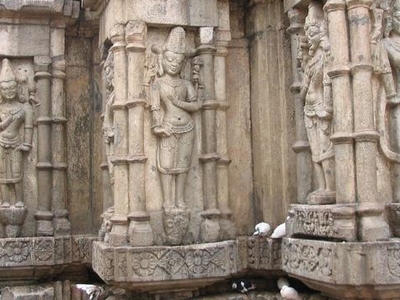 Save me
Been here
Want to go
Show on Map
Here to help 76 tour guides, 208 locals and 2 ambassadors

The Kamakhya Temple is an ancient Shakti Peeth temple situated on the Nilachal Hill in western part of Guwahati city in Assam, India. It is the main temple in a complex of individual temples dedicated to different forms of the mother goddess as the Dasa Mahavidya, including Bhuvaneshvari, Bagalamukhi, Chinnamasta, Tripura Sundari and Tara. It is an important pilgrimage destination for general Hindu and Tantric worshipers.

Description:
The temple was built in first millennium during the time of Kamarupa. Allahabad rock inscriptions of Samudragupta mentioned about it. The current structure has a beehive-like shikhara with delightful sculptured panels and images of Ganesha and other Hindu gods and goddesses on the outside. The temple consists of three major chambers. The western chamber is large and rectangular and is not used by the general pilgrims for worship. The middle chamber is a square, with a small idol of the Goddess, a later addition. The walls of this chamber contain sculpted images of Naranarayana, related inscriptions and other gods.

The middle chamber leads to the sanctum sanctorum of the temple in the form of a cave, which consists of no image but a natural underground spring that flows through a yoni-shaped cleft in the bedrock. During the Ambuvaci festival each summer,the menstruation of the Goddess Kamakhya is celebrated. During this time, the water in the main shrine runs red with iron oxide resembling menstrual fluid. It is likely that this is an ancient Khasi sacrificial site, and worshiping here still includes sacrifices. Devotees come every morning with goats to offer to Shakti. The Kalika Purana, an ancient work in Sanskrit describes Kamakhya as the yielder of all desires, the young bride of Shiva, and the giver of salvation. Shakti is known as Kamakhya.

Worship:
The first tantric Kamakhya Temple was destroyed during the Mongol invasion in the Nilachal hills in the 12 BC, so was the fate of the second tantric temple destroyed in the Muslim attacks, probably by the Hindu convert Muslim warrior 'Kala Pahad'. The Brahaminical legend of the 'Shakti' in the later period led to the worship of the tantric goddess as Hindu 'Shakti' goddess. The worship of all female deity in Assam symbolizes the "fusion of faiths and practices" of Aryan and non-Aryan elements in Assam. The different names associated with the goddess are names of local Aryan and non-Aryan goddesses. The Yogini Tantra mentions that the religion of the Yogini Pitha is of Kirata origin.

According to Banikanta Kakati, there existed a tradition among the priests established by Naranarayana that the Garos, a matrilineal people, offered worship at the earlier Kamakhya site by sacrificing pigs. The goddess is worshiped according to both the Vamachara (Left-Hand Path) as well as the Dakshinachara (Right-Hand Path) modes of worship. Offerings to the goddess are usually flowers, but might include animal sacrifices. In general female animals are exempt from sacrifice, a rule that is relaxed during mass sacrifices.

Legends:
Vatsayana, a Vedic Sage in Varanasi during the later first Century was approached by the King in the Himalayan region (now Nepal) to find a solution to convert the tribals and their rituals of human sacrifice to a more socially accepted worship. The Sage suggested the worship of a tantric goddess Tara that spread towards the eastern Himalayan belt till the Garo Hills where the tribals worshipped a fertility 'yoni' goddess 'Kameke'. It was much later in the later Brahaminical period Kalika Purana that most tantric goddess were related to the legend of 'Shakti' and began to be erroneously worshipped as a 'devi' by the Hindus.

According to the Kalika Purana, Kamakhya Temple denotes the spot where Sati used to retire in secret to satisfy her amour with Shiva, and it was also the place where her yoni fell after Shiva danced with the corpse of Sati. This is not corroborated in the Devi Bhagavata, which lists 108 places associated with Sati's body, though Kamakhya finds a mention in a supplementary list. The Yogini Tantra, a latter work, ignores the origin of Kamakhya given in Kalika Purana and associates Kamakhya with the goddess Kali and emphasizes the creative symbolism of the yoni.

Kamakhya During Ahom Era:
According to a legend the Koch Bihar royal family was banned by Devi herself from offering puja at the temple. In fear of this curse, to this day no descendants of that family dares to even look upward towards the Kamakhya hill while passing by. Without the support of the Koch royal family the temple faced lot of hardship. By the end of 1658, the Ahoms under king Jayadhvaj Singha had conquered the Lower Assam and their interests in the temple grew. In the decades that followed the Ahom kings, all who were either devout Shaivite or Shakta continued to support the temple by rebuilding and renovating it.

Rudra Singha (reign 1696 to 1714) was a devout Hindu and as he grew older he decided to formally embrace the religion and become an orthodox Hindu by being initiated or taking sharan of a Guru, who would teach him the mantras and become his spiritual guide. But, he could not bear the thought of humbling himself in front a Brahmin who is his subject. He therefore sent envoys to Bengal and summoned Krishnaram Bhattacharyya, a famous mahant of Shakta sect who lived in Malipota, near Santipur in Nadia district. The mahant was unwilling to come, but consented on being promised to be given the care of the Kamakhya temple to him. Though the king did not take sharan, he satisfied the mahant by ordering his sons and the Brahmins in his entourage to accept him as their spiritual guru.

When Rudra Singha died, his eldest son Siba Singha (reign 1714 to 1744), who became the king, gave the management of the Kamakhya temple and along with it large areas of land (Debottar land) to Mahant Krishnaram Bhattacharyya. The Mahant and his successors came to be known as Parbatiya Gosains, as they resided on top of the Nilachal hill. Many Kamakhya priests and modern Saktas of Assam are either disciples or descendants of the Parbatiya Gosains, or of the Nati and Na Gosains.

Festivals:
Being the centre for Tantra worship this temple attracts thousands of tantra devotees in an annual festival known as the Ambubachi Mela. Another annual celebration is the Manasha Puja. Durga Puja is also celebrated annually at Kamakhya during Navaratri in the autumn. This five day festival attracts several thousand visitors.

Here's the our members favorite photos of "Temples in Guwahati". Upload your photo of Kamakhya Temple!

Going to Kamakhya Temple? Get answers from our friendly locals

Get in touch with 2 Touristlink members who want to visit Kamakhya Temple or with Hemonta Borah, Praveen Gahlawat and 2 others who already have been here.