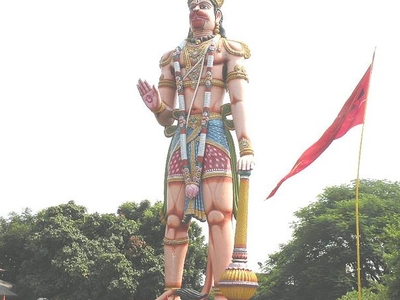 Hanuman Vatika, or the garden belonging to Hanuman, is situated in Rourkela. The garden houses the tallest statue of Hanuman in Orissa.

Attractions:
The garden was renovated and inaugurated by the chief minister, the late Biju Patnaik of Orissa. The height of the statue is 75 feet. Every year on 23 February it celebrates its foundation day. Other temples inside the premises are 12 Jyotirlingas, Batta Mangala Devi, Sarala Devi Temple, Jagannath Temple, Lakshmi, and Santoshi Mata Temple. One Kalyan Mandap is built to accommodate public gatherings and functions. The Hanuman statue was built by Sri Lakshman Swami of Hyderabad. The newly established Sai Baba temple has become the favorite of the devotees, the idol of which is very similar to the idol of the one situated in Shirdi Sai Baba.

Location:
It is situated adjacent to Rourkela General Hospital on the way to Panposh.

Here's the our members favorite photos of "Temples in Rourkela". Upload your photo of Hanuman Vatika!

Going to Hanuman Vatika? Get answers from our friendly locals

Ayesha Parija is the only Touristlink member to visit Hanuman Vatika. Have you been here? Click here to save it.