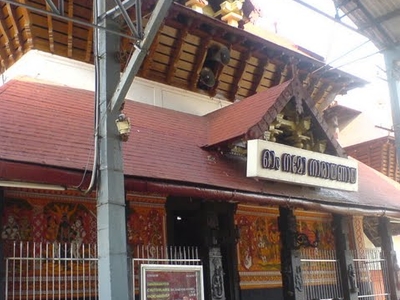 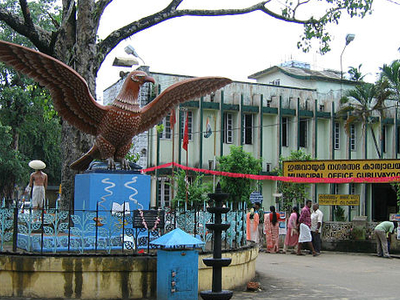 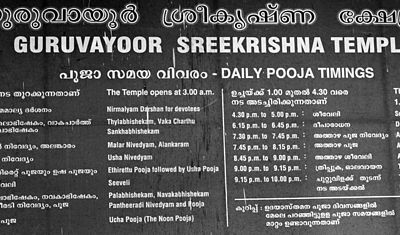 Guruvayur Sri Krishna Temple is a Hindu temple dedicated to God Krishna, located in the town of Guruvayur in Kerala, India. It is one of the most important places of worship for Hindus of Kerala and is often referred to as "Bhuloka Vaikunta" which translates to the "Holy Abode of Vishnu on Earth". The idol installed at Guruvayur Sri Krishna Temple represents a form of Krishna with its four arms carrying the conch Pancajanya, the magical discus with serrated edges Sudarshana Chakra, the mace Kaumodaki and a lotus with a Holy basil garland. This idol represents the majestic form of god Vishnu as revealed to Vasudeva and Devaki around the time of Krishna; hence Guruvayur is also known as "Dwaraka of South India". Krishna is popularly known in Kerala by different names such as Kannan, Unnikkannan ("Baby" Kannan), Unnikrishnan, Balakrishnan, and Guruvayurappan.

The "presiding" deity in the Sri Kovil of the Guruvayur Sri Krishna Temple is Vishnu. He is currently worshipped  according to routines laid down by Adi Shankara and later written formally in the tantric way, the inter-religious spiritual movement that arose in medieval India, by Cennas Narayanan Nambudiri (born in 1427). The Cennas Nambudiris are the hereditary tantris of the Guruvayur Temple. The temple routines are strictly followed. The tantri is available full-time at the Temple to ensure this. The Melsanti enters the sanctum sanctorum at 2:30 in the morning and does not drink anything up to the completion of "noon worships" at 12:30 PM. The Vedic traditions being followed at this temple with absolute perfection is the hallmark of the Guruvayur temple. It is important to note here that, even though the shrine is considered to be one of the holiest spots for Vaishnavites, the temple is not a part of the famous 108 Holy Temples.

Story Of Diety:
The deity of the Guruvayur Temple is unique, since it is carved out of a stone called "Patalanjana Stone", and is considered extremely sacred by the Hindus. This idol was once worshipped by god Vishnu in Vaikuntha and he handed it over to god Brahma. King Manu and his wife, Satarupa worshipped Brahma for a child and being gratified with their devotion, they received this Deity from him and advised them to start worshipping it. Being pleased with their worship, Vishnu appeared before them and blessed them with the boon that he himself will be born as their child in their four re-births in three different forms and in four different situations, with the deity.

Thus they got the good fortune to worship the same deity in all four rebirths. They gave birth to Prsnigarbha who gave to the World the practice of Brahmacarya (Celibacy). In their next birth, Sutapas and his wife were born as Kasyapa and Aditi and their son was Vamana. In the third rebirth as Dasaratha and Kausalya, Vishnu was born as their son Rama. In the fourth rebirth as Vasudeva and Devaki, Vishnu was born as their eighth child Krishna. In the long run, god Krishna himself installed this deity at Dwaraka and worshipped it knowing that it is none other than himself.

The Temple of Guruvayoor:
The Krishna temple in the town of Guruvayoor in Kerala is one of the five famous Krishna/Vishnu temples in India. The others are Jagannath Puri in Orissa, Venkatachalapati in Andhra Pradesh, Nathdwara in Rajasthan and Dwaraka in Gujarat. Of course there are many other famous ones of Vishnu as well as of Krishna but these are considered to be the most popular. Even though the idol in Guruvayoor is that of Vishnu it is still known as a Krishna temple since the boy Krishna is always said to be running around incognito in the temple precincts. Guruvayoor is known as “Bhuloka Vaikunta” or the abode of Vishnu on earth.

The whole life of this town revolves round the temple and there is very little activity beyond what is connected with the temple even though there are a few other noteworthy temples in the area. One can get to Guruvayoor by car or train from the town of Thrissur which is very close to Cochin. There are many flights connecting Cochin with all the big towns of India. God Krishna in Guruvayoor is popularly called Sri Guruvayoorappan. Appan means God or father so the title means the God of Guruvayoor. The small idol is made of the stone known as black antimony and is a magnetic stone said to have special medicinal properties.

Dress Code For Entering The Temple:
Strict dress code exists for people who wish to enter the Guruvayur Temple. Men are to wear mundu around their waist, without any dress covering their chest. But it is allowed to cover the chest region with a small piece of cloth. Boys are allowed to wear shorts, but they are also prohibited from wearing a shirt. Girls and women are not allowed to wear any trouser like dresses or short skirts. Women are allowed to wear sari and girls are to wear long skirt and blouses. Presently the dress code for women have been relaxed with shalwar kameez being allowed. Unlike in northern India, in Kerala and other southern Indian states Hindu women do not cover their heads in temples. Like all other temples in India, footwear is strictly prohibited. Security restrictions prevent carrying of mobile phones or cameras into the temple. In peak hours it is better to keep the sandals,phones in hotel itself becase of only one locker shop.

Location And Transport:
The temple is located about 29 km from Thrissur. The nearest railway station is at Guruvayur. Only Guruvayur-Chennai Egmore express train from Chennai via Thiruvananthapuram, Madurai and Tiruchirapalli runs up to this station. However, a regular passenger train service to Ernakulam via Thrissur is available. The nearest major railway station with better connectivity is at Thrissur. The nearest airport (75 km) is Cochin International Airport, at Nedumbassery near Kochi. Guruvayur is well connected from all major towns of Kerala and Tamil Nadu. Various private and state government-owned bus companies operate regular services to this temple town. The annual festival starts by hoisting the holy flag on the golden mast erected in front of the Temple. The holy rope for hoisting the Flag comes from Sree Mahavishnu Temple at Panangad near Kochi as a procession.

Here's the our members favorite photos of "Temples in Thrissur". Upload your photo of Guruvayoor Temple!

Going to Guruvayoor Temple? Get answers from our friendly locals

Connect with Greenroutes Holidays, Bejoy Chacko and 4 other members who have already visited Guruvayoor Temple.