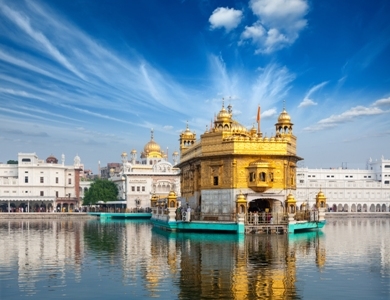 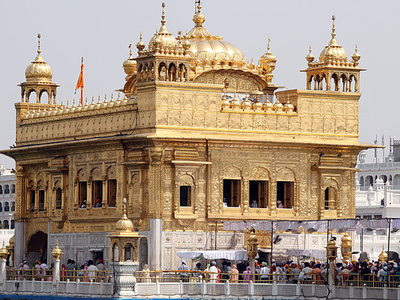 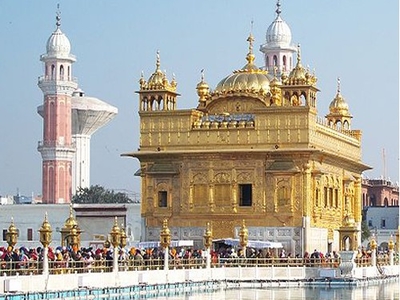 More Photos >
Save me
Been here
Want to go
Show on Map
Here to help 41 tour guides, 112 locals and 2 ambassadors

The Harmandir Sahib also Darbar Sahib and informally referred to as the Golden Temple is a prominent Sikh Gurdwara located in the city of Amritsar, Punjab, India. It was built by the fifth Guru of the Sikhs, Guru Arjan Dev, in the 16th Century. In 1604, Guru Arjan Dev ji completed the Adi Granth, the holy scripture of Sikhism, and installed it in the Gurdwara.

There are four doors to get into the Harmandir Sahib, which symbolize the openness of the Sikhs towards all people and religions. The present day Gurdwara was rebuilt in 1764 by Jassa Singh Ahluwalia with the help of other Sikh Misl's. In the early nineteenth century, Maharaja Ranjit Singh secured the Punjab region from outside attack and covered the upper floors of the Gurdwara with gold, which gives it its distinctive appearance and English name the Golden Temple.

Sri Harmandir Sahib is considered holy by Sikhs. The most holy text of Sikhism, the Guru Granth Sahib[6], is always present inside the Gurdwara. Its construction was mainly intended to build a place of worship for men and women from all walks of life and all religions to come and worship God equally. Over one lakh (100,000) people visit the holy shrine daily for worship.

History:
Sri Harmandir Sahib literally means The Temple of God. The fourth guru of Sikhism, Guru Ram Das ji, excavated a tank in 1577 CE which subsequently became known as Amritsar (meaning "Pool of the Nectar of Immortality"), giving its name to the city that grew around it. In due course, a splendid Sikh edifice, Sri Harmandir Sahib (meaning "the abode of God"), rose in the middle of this tank and became the supreme centre of Sikhism. Its sanctum came to house the Adi Granth comprising compositions of Sikh Gurus and other saints considered to have Sikh values and philosophies, e.g., Baba Farid, and Kabir. The compilation of The Adi Granth was started by the fifth guru of Sikhism, Guru Arjan Dev ji.

Construction of Sri Harmandir Sahib:
Originally built in 1574, the site of the Gurdwara was surrounded by a small lake in a thin forest. The third of the six grand Mughals, Emperor Akbar, who visited the third Sikh Guru, Guru Amar Das, in the neighbouring town of Goindval, was so impressed by the way of life in the town that he gave a jagir (the land and the revenues of several villages in the vicinity) to the Guru's daughter Bhani as a gift on her marriage to Bhai Jetha, who later became the fourth Sikh Guru, Guru Ram Das ji. Guru Ram Das ji enlarged the lake and built a small township around it. The town was named after Guru Ram Das ji as Guru Ka Chak', Chak Ram Das or Ram Das Pura.

Artwork And Monument Sculptures:
Much of the present decorative gilding and marblework dates from the early 19th century. All the gold and exquisite marble work were conducted under the patronage of Hukam Singh Chimni and Emperor Ranjit Singh, Maharaja of the Sikh Empire of the Punjab. The Darshani Deorhi Arch stands at the beginning of the causeway to Sri Harmandir Sahib; it is 202 feet (62 m) high and 21 feet (6 m) in width. The gold plating on the Harmandir Sahib was begun by Emperor Ranjit Singh and was finished in 1830.

The Sher-e-Punjab (Lion of the Punjab) was a major donor of wealth and materials for the shrine and is remembered with much affection by the Punjabi people in general and the Sikh community in particular. Maharaja Ranjit Singh also built two of the other most sacred Gurdwaras in Sikhism. This was because Maharaja Ranjit Singh had a deep love for the tenth guru of Sikhism Guru Gobind Singh. The other two most sacred Gurdwaras in Sikhism, which he built, are Takht Sri Patna Sahib (initiation or birth place of Guru Gobind Singh ji) and Takht Sri Hazur Sahib, the place of Guru Gobind Singh ji's Sikh ascension into heaven.

Here's the our members favorite photos of "Temples in Amritsar". Upload your photo of Golden Temple!

Going to Golden Temple? Get answers from our friendly locals

Get in touch with 39 Touristlink members who want to visit Golden Temple or with Inder Bambra, Yuvasan Travels and 56 others who already have been here.