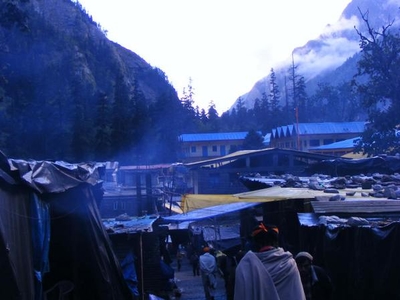 Ghangaria is a small village on the way to Hemkund Sahib, a popular pilgrimage site for Sikhs which is about 6 km from here and the Valley of Flowers, a national park known for its variety of flowers about 3 km from here. It is located in the northern Himalayan ranges at an altitude of 3049 meters in Uttarakhand state of India. Ghangaria is situated at the confluence of the rivers Bhyundar Ganga and Pushpawati, which forms Lakshman Ganga, that later meets the river Alaknanda at Govindghat. It is the last human habitation in the Bhyundar valley. This place is usually used by travelers as a base camp to visit Hemkund and Valley of flowers. It is only open from May till September. The rest of the year the valley is covered under 8 feet of snow.

Ghangaria can be reached after a 13 km trek from Govindghat. One can also hire a porter or mule to avoid this strenuous trekking. There is no clear road, only a path made of rocks. Ghangaria has various hotels including one from the GMVN (Garhwal Mandal Vikas Nigam), restaurants serving Punjabi dishes, shops, camping grounds and a big Gurdwara to accommodate all the pilgrims. Earlier only satellite telephone service was available, with only one outgoing call allowed for the entire village at any given time, but now you get weak signal of BSNL GSM and IDEA GSM operators.

Ghangaria Tourism:
Places to see in ghangaria Valley of Flowers National Park is nestled in the west Himalayas covering an area of 87.50 sq kms. It can be reached by a short trek of 4 km from Ghangaria. The valley is entirely covered with blooming flowers from June to October and with the sheets of snow during winters. The Valley of Flowers was declared as the national park in the year 1982 and it is now a World heritage site. The virgin beauty of this valley lures the botanists, nature lovers and adventure lovers as well. It is the home of over 500 species of wild flowers. Hemkund Sahib: The tenth Guru of the Sikhs, Guru Govind Singhji mediated at Hemkund Sahib for years. The word Hemkund literally suggests Lake of snow& and the immaculate water of this lake is as cold as snow.

Hemkund Saheb is located at an elevation of 4,329 mts above sea level amidst several snow capped peaks, which are collectively called Hemkund Parvat. A star shaped gurudwara near the lake is visited by thousands of devotees every month. A temple dedicated to Lakshman, brother of Lord Rama is also located here. One must complete a trek of 6 km from Ghangharia to reach Hemkund Sahib. The best time to visit this place is from July to November.

Here's the our members favorite photos of "Towns & Villages in Uttarakhand". Upload your photo of Ghangaria!

Going to Ghangaria? Get answers from our friendly locals