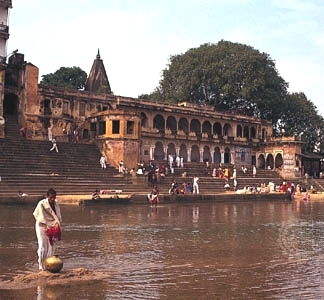 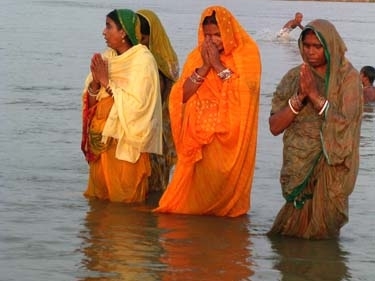 The river Phalgu (Falgu Or फल्गु नदी) which flows past Gaya, India in the Indian state of Bihar, is a sacred river for Hindus. The Phalgu is formed by the junction, some two miles below Bodh Gaya, of the Lilajan (also called Niranjan or Nilanjan) and the Mohana, two large hill streams each of which is over 300 yards wide. The Phalgu is also mentioned as Niranjan. The united stream flows on to the north past the town of Gaya, where it attains a breadth of over 900 yards. The Phalgu here passes by a high rocky bank, on the steep sides of which are many paved stairs leading down to the river bed, while high above are the Vishnupad Mandir, with many minor shrines around it. It then runs in a north-easterly direction for about 17 miles (27 km), and opposite the Barabar Hills it again takes the name of Mohana, and divides into two branches which eventually flow into a branch of the Punpun.

Religious Significance:
The portion of the course of the Phalgu flowing by Gaya is sacred to the Hindus. It is the first holy site visited by the pilgrim and here his first offering must be made for the souls of his ancestors. According to the Gaya Mahatmya, which forms part of the Vayu Purana, the Phalgu is the embodiment of Vishnu himself. One tradition states that it formerly flowed with milk.

According to Hindu belief, the soul wanders after death until pindadan, or religious service seeking salvation for the dead from the cycle of rebirth, is performed. The fortnight-long pitrapaksh period is considered auspicious to offer pindadan. The 15 days of the waning moon during the Hindu month of Ashvin are known as pitrapaksh. Pindadan is traditionally offered on the banks of the Phalgu at Gaya. It is mandatory for Hindu devotees offering pindadan to shave their heads and take a holy dip and head for the Baitarni pond. The prayers are performed at the Vishnupad Mandir. Priests, known as Gaywal-pandas, conduct the ritual. Thousands of Hindus visit Gaya for the purpose of pindadan.

Mythology:
There is reference to the city of Gaya and the Phalgu in the Ramayana in which it says that Sita had cursed the Phalgu River. There is an interesting story and the mythology states that on account of this curse, the Phalgu lost its water, and the river is simply a vast stretch of sand dunes. According to tradition, in the absence of Rama, his wife Sita offered pinda on its banks to Dasharatha father of Rama.

Here's the our members favorite photos of "Rivers in Gaya". Upload your photo of Falgu River!

Going to Falgu River? Get answers from our friendly locals

Dinesh Sahota is the only Touristlink member to visit Falgu River. Have you been here? Click here to save it.