Church of St Anne at Talaulim 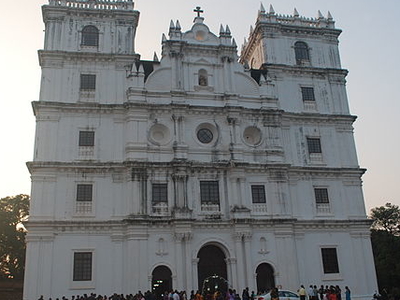 The Church of St. Anne is a religious monument located in Santana, Goa, India. It is an example of baroque architecture. Majestically nestled in the verdant hills of Santana, Talaulim, the Church of Anne was declared a "national monument" during the Portuguese era per Government Portario No. 1360 of 31/3/31. In that Portario—studded like priceless diamonds—were also the Bom Jesus Basilica, the Se Cathedral, the Church of St. Francis of Assisi, the Convent of Santa Monica and the Church of St. Cajetan. Each of these, monumental in their architectural splendor, and all of them huddled in the former Portuguese capital of Old Goa, Goa.

Construction of the Church of St. Anne began in 1577 by Monsignor Francisco de Rego (1681–1689) and its completion in 1695 fell upon the shoulders of his successor, Rev. Fr. Antonio Francisco da Cunha.
Legend has it that while construction was in progress, an elderly villager by the name of Bartholomeu Marchon, had a vision of an old lady donning a hat with a staff in hand. The old lady ambled down the neighboring hill and promulgated to Bartholomeu that the Church under construction was her home, and that it was her intent to reside there.

A similar apparition was also encountered by a Brahmin lady of high social standing, who happened to be gravely ill and almost in death's clutch. The celestial apparition anointed the lady with a miraculous cure and as a token of supreme gratitude, she embraced Christianity. Word of her miraculous cure percolated down to the village priest who instantly interpreted it as a sign of divine intervention, and without further ado, consecrated the church in honor of St. Anne.

Here's the our members favorite photos of "Churches in Goa". Upload your photo of Church of St Anne at Talaulim!

Going to Church of St Anne at Talaulim? Get answers from our friendly locals