Azamgarh is a town in the Indian state of Uttar Pradesh. It is headquarters of Azamgarh district and Azamgarh Division. Azamgarh, one of the easternmost districts of the State, once formed a part of the ancient Kosala kingdom, except the north-eastern part of it which was included in the kingdom of Malla.
View Azamgarh guide > 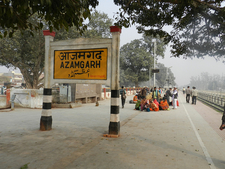