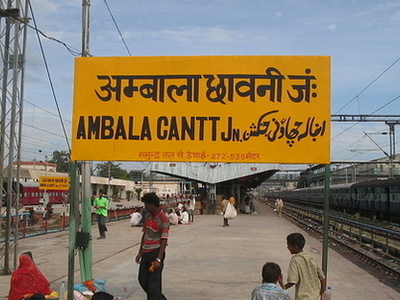 Ambala is a city and a municipal corporation in Ambala district in the state of Haryana, India, located on the border to the state of Punjab. Politically; Ambala has two sub-areas: Ambala Cantonment and Ambala City, approximately 3 kilometers apart from each other, therefore it is also known as "Twin City". It has a large Indian Army and Indian Air Force presence within the confines of its cantonment area. Ambala separates the Ganges river network from the Indus river network and is surrounded by two rivers - Ghaggar and Tangri - to the north and to the south. Due to its geographical location, the Ambala district plays an important role in local tourism.

History
It is said that Ambala District was founded by Amba Rajput during the 14th century AD. Another version is that the name is a corruption of Amba Wala meaning the mango-village, from mango groves which existed in its immediate neighborhood. Still another version is that the District has taken its name after goddess "Bhawani Amba" whose Temple still exists in Ambala city.

The Ambala Cantonment was established in 1843 after the British abandoned its cantonment at Saphera, following the malaria epidemic of 1841–42. The cantonment houses the ‘2 Corps’ one of the three Strike Corps of the Indian Army.

Industry:
Ambala is known as city of scientific instruments.It is a major scientific products market and is a hub for products like glass apparatus, microscopes, laboratory equipment etc. Ambala constitutes nearly 34% of the total production of scientific instruments produced in India.Ambala is also famous for its clothes market, which draws shoppers from surrounding areas. The market possesses a wide range of custom-made clothes for men and women.

Transport
Ambala is connected to all of the other major cities of north India including Delhi, Chandigarh, Amritsar and Shimla. It is a big interchange for various commuters for all neighbouring states. The Ambala Cantt bus stand sees roughly 50,000 commuters daily.Apart from the Interstate service, Ambala also houses one of the oldest local bus service in Haryana, which is run by both Haryana roadways and private companies. Other means of local transportation include auto rickshaws and cycle rickshaws.

Railways Ambala is a divisional headquarters of the Northern Railway Zone and is an important railway junction. The Ambala Cantonment railway station was founded on the junction of the Delhi-Kalka and Ludhiana-Saharanpur lines. The historic Delhi-Ambala-Kalka railway line dates back to 1889 while the Ludhiana-Saharanpur line was built in 1870. Situated 200 km north of Delhi, this town is well connected by the rail and road network.

Here's the our members favorite photos of "Cities in Haryana". Upload your photo of Ambala!

Going to Ambala? Get answers from our friendly locals