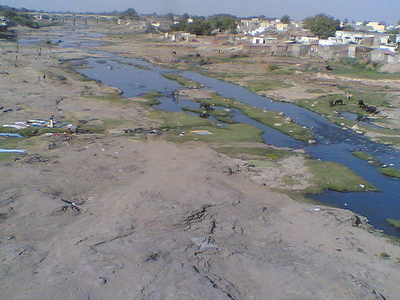 Aji River is one the main river of saurashtra (region), Gujarat State. It is called life line of Rajkot City and separates Rajkot in east-west parts.There are four dams on Aji River. Water of them are being used for agriculture and drinking purposes.

Purification Project:
Rajkot Municipal Corporation has started project for purification of Aji River and provide retaining walls and plantations at both ends.Aji is one of the major river of rajkot jillah. Originating from the hilly areas of sardhar and hingolgadh,it runs some 250 km.and meet to gulf of kucthh and hence ends its journey there.One of the major tributaries of Aji is Nyari river originating from hills of sarshar near Atkot.There are major projects on Aji, and all are irrigation projects but none of them supports any canal system to irrigate lands.

Here's the our members favorite photos of "Rivers in Gujarat". Upload your photo of Aji River!

Going to Aji River? Get answers from our friendly locals