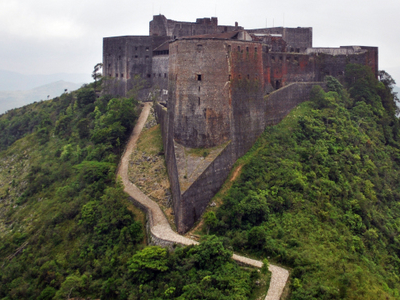 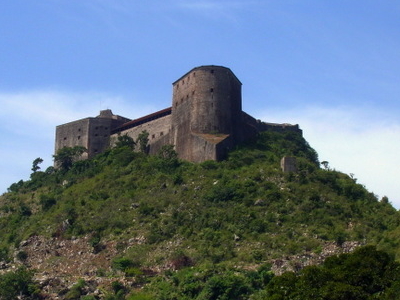 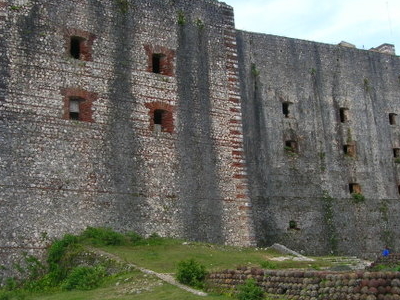 The Citadelle Laferrière or, Citadelle Henry Christophe, or simply the Citadelle (in English, spelled Citadel), is a large mountaintop fortress in northern Haiti, approximately 17 miles (27 km) south of the city of Cap-Haïtien and five miles (8 km) uphill from the town of Milot. It is the largest fortress in the Americas and was designated by the United Nations Educational, Scientific and Cultural Organization (UNESCO) as a World Heritage Site in 1982-along with the nearby Sans-Souci Palace. The mountaintop fortress has itself become an icon of Haiti. The Citadel was built by Henri Christophe, a key leader during the Haitian slave rebellion, after Haiti gained independence from France at the beginning of the 19th century.

History
The massive stone structure was built by up to 20,000 workers between 1805 and 1820 as part of a system of fortifications designed to keep the newly-independent nation of Haiti safe from French incursions. The Citadel was built several miles inland, and atop the 3,000 ft (910 m) Bonnet a L’Eveque mountain, to deter attacks and to provide a lookout into the nearby valleys. Cap-Haïtien and the adjoining Atlantic Ocean are visible from the roof of the fortress. Anecdotally, it is possible to sight the eastern coast of Cuba, some 90 miles (140 km) to the west, on clear days.

The Haitians outfitted the fortress with 365 cannons of varying size. These were obtained from various nations and still bear the crests of 18th Century monarchs. Enormous stockpiles of cannonballs still sit in pyramidal stacks at the base of the fortress walls. Since its construction, the fortress has withstood numerous earthquakes, though a French attack never came and it was eventually abandoned. Though most of the fortress has no roof as such (the interior top is a latticework of stone walkways), some slanted portions are adorned with bright red tiles. The fortress has been repaired and refurbished several times since its construction, including in the 1980s with help from UNESCO and the World Monuments Fund, though little of it has been replaced, and its design remains the same.

Tourism
The Citadel is one of the most popular tourist destinations in Haiti. Directions to and history of the fortress are provided by self-appointed guides from the town of Milot. Near the entrance to Sans-Souci Palace, which is at the start of the trail to the Citadel, visitors may be asked to pay a small fee. Visitors are also encouraged to rent a horse for the uphill trek. The first portion of the seven-mile (11 km) trail is navigable by 4WD vehicle, although infrequent landslides and construction projects sometimes make this unreliable. Numerous people live along the trail and will sell souvenirs or drinks to travelers, the latter (fresh coconut juice) a necessity in the tropical heat. The trail itself is paved stone, generally smooth and in good condition, a legacy of the Jean-Claude Duvalier regime.

Conservation and Safety Concerns
After visiting the Citadel in July 2012, President Michel Martelly heavily criticized the National Institute for Historic Preservation (ISPAN) - the organization tasked with preserving Haiti’s cultural heritage sites - describing the site as in a state of disrepair and calling ISPAN's efforts “unacceptable.” His visit was intended to assess the state of the Citadel for conservation, but he refused to visit its upper levels, deeming them unsafe for visitors.

Global Heritage Fund, a California-based non-profit organization, has investigated the Citadel for a multi-year project of historic monument conservation, community development, training and cultural heritage revitalization. The project would focus on both the Citadel and nearby Sans-Souci Palace, with hopes of preserving the structures as safe tourism sites to promote sustainable local economic growth.

Here's the our members favorite photos of "Forts in Cap-Haïtien". Upload your photo of Citadelle Laferriere!

Going to Citadelle Laferriere? Get answers from our friendly locals

Get in touch with 4 Touristlink members who want to visit Citadelle Laferriere or with Brian Weed who already have been here.