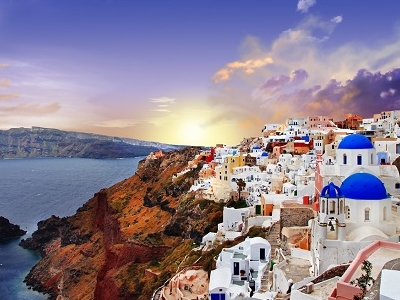 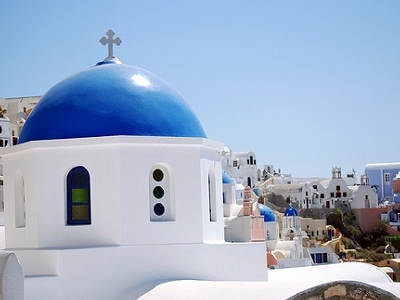 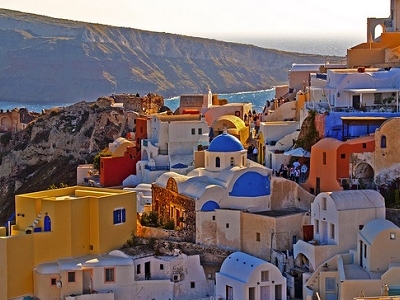 More Photos >
Save me
Been here
Want to go
Show on Map
Here to help 10 tour guides, 2 locals and 1 ambassador

Santorini is an island in the southern Aegean Sea, about 200 km (120 mi) southeast of Greece's mainland. It is the largest island of a small, circular archipelago which bears the same name and is the remnant of a volcanic caldera. It forms the southernmost member of the Cyclades group of islands, with an area of approximately 73 sq km (28 sq mi) and a 2011 census population of 15,550. The municipality of Santorini includes the inhabited islands of Santorini and Therasia and the uninhabited islands of Nea Kameni, Palaia Kameni, Aspronisi, and Christiana. The total land area is 90.623 sq km (34.990 sq mi). Santorini is part of the Thira regional unit.

Santorini is essentially what remains after an enormous volcanic eruption that destroyed the earliest settlements on a formerly single island, and created the current geological caldera. A giant central, rectangular lagoon, which measures about 12 by 7 km (7.5 by 4.3 mi), is surrounded by 300 m (980 ft) high, steep cliffs on three sides. The main island slopes downward to the Aegean Sea. On the fourth side, the lagoon is separated from the sea by another much smaller island called Therasia; the lagoon is connected to the sea in two places, in the northwest and southwest. The depth of the caldera, at 400m, makes it possible for all but the largest ships to anchor anywhere in the protected bay; there is also a fisherman harbour at Vlychada, on the southwestern coast. The island's principal port is Athinias. The capital, Fira, clings to the top of the cliff looking down on the lagoon. The volcanic rocks present from the prior eruptions feature olivine and have a small presence of hornblende.

It is the most active volcanic centre in the South Aegean Volcanic Arc, though what remains today is chiefly a water-filled caldera. The volcanic arc is approximately 500 km (310 mi) long and 20 to 40 km (12 to 25 mi) wide. The region first became volcanically active around 3–4 million years ago, though volcanism on Thera began around 2 million years ago with the extrusion of dacitic lavas from vents around the Akrotiri.

The island is the site of one of the largest volcanic eruptions in recorded history: the Minoan eruption (sometimes called the Thera eruption), which occurred some 3,600 years ago at the height of the Minoan civilization. The eruption left a large caldera surrounded by volcanic ash deposits hundreds of metres deep and may have led indirectly to the collapse of the Minoan civilization on the island of Crete, 110 km (68 mi) to the south, through a gigantic tsunami. Another popular theory holds that the Thera eruption is the source of the legend of Atlantis.

Tourism:
In 1956 a major earthquake near Amorgos island resulted in the demolishing of many buildings in the north of Santorini, leading to the desertion of many of its villages. The expansion of tourism has resulted in the growth of the economy and population. The major settlements include Fira (Phira), Oia, Emporio, Kamari, Perissa, Imerovigli, Pyrgos, and Therasia. Akrotiri is a major archaeological site, with ruins from the Minoan era. Santorini's primary industry is tourism, particularly in the summer months. In 2007, the cruise ship MS Sea Diamond ran aground and sank inside the caldera. The island's pumice quarries have been closed since 1986, in order to preserve the caldera. Santorini was ranked the World's top island for many other magazines and travel sites, including the Travel+Leisure Magazine, the BBC, as well as the US News.

Here's the our members favorite photos of "Islands in South Aegean". Upload your photo of Santorini!

Going to Santorini? Get answers from our friendly locals

Get in touch with 84 Touristlink members who want to visit Santorini or with Deepak Gupta, Deepak Nashine and 42 others who already have been here.