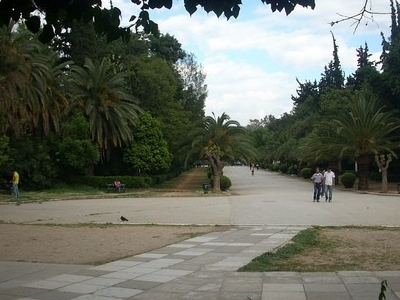 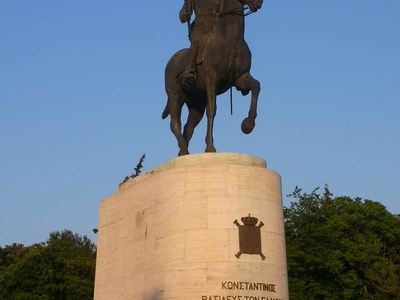 The Pedion tou Areos or Pedion Areos, meaning Field of Mars, corresponding to the French Champ de Mars and the ancient Campus Martius) is one of the largest public parks in Athens, Greece. It is also the name of the wider neighbourhood. The park was designed in 1934 and its purpose was to honour the heroes of the Greek revolution of 1821, 21 of whom are depicted in marble busts standing in the park.

The park is a state-owned public ground, covering an area of 27.7 hectares, and is located about 1 km NE from the Omonoia Square. Today, it is enclosed by the streets Mavromateon, Evelpidon, Pringiponisson and the Alexandras Avenue. In front of the main entrance of the park there is an equestrian statue of king Constantine I since 1938. At the other entrance, near Alexandras Avenue, there stands a memorial to the English, Australian and New Zealander soldiers who fought in the Battle of Greece in the Second World War. The memorial is surmounted by a statue of goddess Athena. A total renovation of the park was completed in December 2010.

The work of planting and upgrading actually began in 1935 and continued through the government of Metaxas until 1940, when WW II was declared. During those five years, 46000 trees and bushes were planted. Continuing the plan, deciduous trees were planted to afford the Park shade in the summer and sunlight during the winter. In the central square of the Park there is a fountain surrounded by many plants that thrive in the Mediterranean climate and create beautiful natural colour combinations, corresponding to each season. After the end of the war, in October 1944, irrigation was provided for the Park. The Hellenic Military Geographical Service and the sport camp of Panellinios G.S can be found at the SW part of the Park, in the direction of Kipseli. Inside the Park there are also two churches, a playground and the open theatre ‘Aliki’ that is used for plays, events and concerts. One of Athens’ most historic cafeterias, Green Park, is also located in the Park.

Here's the our members favorite photos of "City Parks in Athens". Upload your photo of Pedion Tou Areos!

Going to Pedion Tou Areos? Get answers from our friendly locals