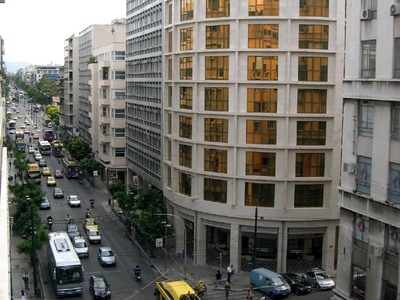 Patission Street (Greek: Οδός Πατησίων) is one of the major streets in central Athens, Greece. Though it is known as Patission, its name was changed to 28 October Street, commemorating the day in 1940 that the Greek dictator Ioannis Metaxas refused the Italian dictator Benito Mussolini's ultimatum that Greece submit to Italian control, thus starting the Greco-Italian War.

Patission Street connects the area known as Patissia with Omonoia Square in the center of Athens. It is crowded by bus and trolley bus lines, which connect the city center with Kypseli (trolley lines 2, 4, 9), Lamprini (trolley lines 5, 13, 14), Patissia (trolley line 11), N. Filadelpheia (trolley line 3), Perissos (bus lines 605, 054), Marousi (bus line A8) and Galatsi (bus line 608). It is a southbound one-way route with a northbound bus lane until it meets Marnis street, and it has three lanes per direction until Amerikis Square.

Here's the our members favorite photos of "Famous Streets in Athens". Upload your photo of Patission Street!

Going to Patission Street? Get answers from our friendly locals