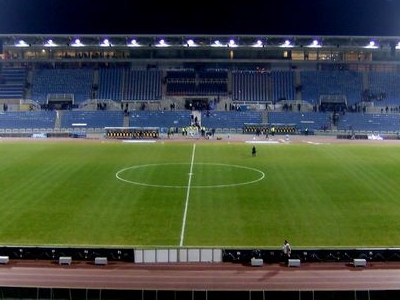 Kaftanzoglio stadium is a sports stadium in Thessaloniki, Greece. The stadium was built with money donated by the Kaftanzoglou Foundation, hence its name. At the time of its opening on 27 October 1960, the stadium was one of the highest quality stadiums in the Balkans. It currently has 27,770 seats, owing to a comprehensive renovation before reopening to host football matches for the 2004 Summer Olympics, which was centred in Athens. It was the largest stadium in Greece until 1982, but has since been surpassed in capacity by the Olympic Stadium in Athens. It had been the home football stadium of Iraklis Thessaloniki FC since 1961.

On the 15th of October 1969, the attendance record was set with 47,458 fans present for a FIFA World Cup qualifying match, witnessing Greece defeat Switzerland by a 4-1 score. In 1973 it hosted the European Cup Winners Cup Final, which resulted in a 1-0 victory for A.C. Milan over Leeds United.

Here's the our members favorite photos of "Stadiums in Thessaloniki". Upload your photo of Kaftanzoglio Stadium!

Going to Kaftanzoglio Stadium? Get answers from our friendly locals