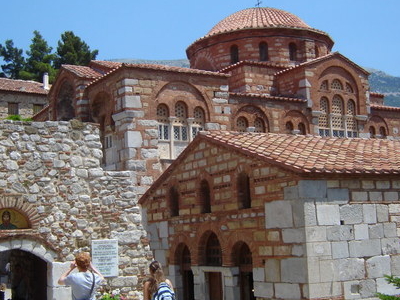 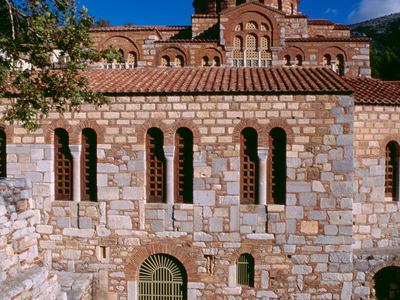 Hosios Loukas is an historic walled monastery situated near the town of Distomo, in Boeotia, Greece. It is one of the most important monuments of Middle Byzantine architecture and art, and has been listed on UNESCO's World Heritage Sites, along with the monasteries of Nea Moni and Daphnion.

History
The monastery of Hosios Loukas is situated at a scenic site on the slopes of Mount Helicon. It was founded in the early 10th century by the hermit, Venerable (Greek: Hosios) St. Luke (Greek: Lukas), whose relics are kept in the monastery to this day. The hermit (who died on 7 February 953) was famous for having predicted the conquest of Crete by Emperor Romanos. It was unclear if he was referring to Romanos I, the emperor at the time. However the island was actually reconquered by Nicephorus Phocas under Romanos II. It is believed that it was during the latter's reign (959-963) that the Church of the Theotokos (Panagia) was constructed.

The main shrine of the monastery is the tomb of St. Luke, originally situated in the vault, but later placed at the juncture of the two churches. The monastery derived its wealth (including funds required for construction) from the fact that the relics of St. Luke were said to have exuded myron, a sort of perfumed oil which produced healing miracles. Pilgrims hoping for miraculous help were encouraged to sleep by the side of the tomb in order to be healed by incubation. The mosaics around the tomb represent not only St. Luke himself, but also hegumen Philotheos offering a likeness of the newly-built church to the saint.

Architecture
The Church of the Theotokos, the oldest in the complex, is the only church known with certainty to have been built in mainland Greece in the tenth century. This centralized parallelogram-shaped building is the oldest example of the cross-in-square type in the country; its plan closely follows that of Lips Monastery in Constantinople. The walls are opus mixtum (part brick, part stone, part marble) and display curious pseudo-kufic patterns.

The Church of the Theotokos adjoins a larger cathedral church, or Katholikon, tentatively dated to 1011-12. The Katholikon is the earliest extant domed-octagon church, with eight piers arranged around the perimeter of the naos (nave). The hemispherical dome (without a drum) rests upon four squinches which make a transition from the octagonal base under the dome to the square defined by the walls below. The main cube of the church is surrounded by galleries and chapels on all four sides.

Here's the our members favorite photos of "Monuments in Central Greece". Upload your photo of Hosios Loukas!

Going to Hosios Loukas? Get answers from our friendly locals

Get in touch with 1 Touristlink members who want to visit Hosios Loukas or with Nasospp, Private Greece and 4 others who already have been here.