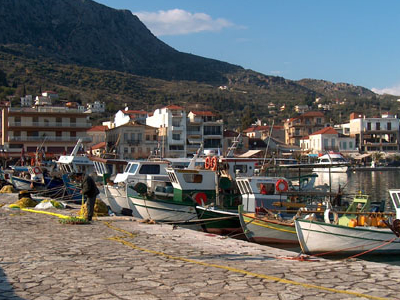 Astakos (Greek: Αστακός, meaning "lobster") is a town and a former municipality in Aetolia-Acarnania, West Greece, Greece. Since the 2011 local government reform it is part of the municipality Xiromero, of which it is a municipal unit. It is located on the eastern shore of the Ionian Sea but small hills to the west of the town block its view of the nearby islands. The place was founded in the ancient times. It is located on a road linking Agios Nikolaos and GR-5 near Mesolonghi slightly east of Aitolikon. In the Byzantine Era, the town was known as Dragamesti. A tiny bay can be found south of Astakos. It is located SSE of Lefkada and Preveza, S of Arta, SW of Amphilochia, W of Agrinion and NW of Aitolikon and Mesolonghi.

Here's the our members favorite photos of "Towns & Villages in West Greece". Upload your photo of Astakos!

Going to Astakos? Get answers from our friendly locals