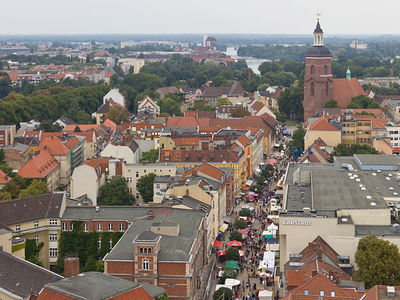 Spandau (pronounced [ˈʃpandaʊ̯]) is the fifth of the twelve boroughs (Bezirk) of Berlin. It is the fourth largest and westernmost borough, situated at the confluence of the Havel and Spree rivers and along the western bank of the Havel, but the least populated.

In the west it borders on the districts of Oberhavel and Havelland, and the city of Potsdam in the federal state of Brandenburg. Modern industries include metal working, chemicals and carpet manufacturing. It was the location of the notorious Spandau Prison until the prison was demolished in 1987. The British New Romantic band Spandau Ballet took their name from the Spandau borough in the British sector of former West Berlin. The borough headquarters occupy Spandau Town Hall, built in 1913.

Here's the our members favorite photos of "Neighborhoods in Berlin". Upload your photo of Spandau!

Going to Spandau? Get answers from our friendly locals