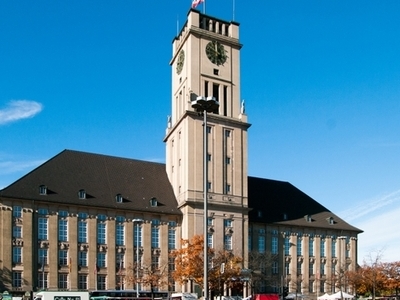 Rathaus Schöneberg is the city hall for the borough of Tempelhof-Schöneberg in Berlin. From 1949 until 1993 it served as the seat of the state senate of West Berlin and until 1991 also as the office of the Governing Mayor.

The sandstone building was constructed between 1911-1914, when it replaced the Old Town Hall of Schöneberg, at that time an independent city (German: Stadtkreis) not yet incorporated into Greater Berlin, which took place in 1920. The Nazi authorities had a series of war murals by Franz Eichhorst added to the interior in 1938. In World War II the building was severely damaged by Allied bombing and during the final Battle of Berlin.

Here's the our members favorite photos of "Town Halls in Berlin". Upload your photo of Rathaus Schöneberg!

Going to Rathaus Schöneberg? Get answers from our friendly locals

Love town halls? Check these out;