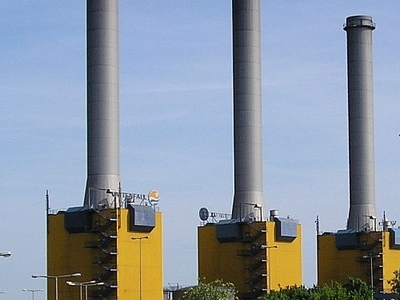 The power station Berlin-Wilmersdorf is a power plant which went into service in 1977 in Berlin-Wilmersdorf. Construction of the facility, which belongs to the BEWAG, started in 1973. At the time of construction, the three power engines are 9000 B gas turbines, manufactured in Belfort (France) by a cooperation between Alsthom and General Electric.

It has three blocks with a power of 110 megawatts, each equipped with a 102 metre high chimney. This very striking facility received an architectural prize in the 1980s.[citation needed] It is not located nearby a river and therefore must take its cooling water from underground. There was an explosion on January 2, 1992 in one of the blocks.[citation needed] It is run by Vattenfall Europe, a subdivision of Vattenfall.

Here's the our members favorite photos of "Power Stations in Berlin". Upload your photo of Power Station Berlin-Wilmersdorf!

Love power stations? Check these out;