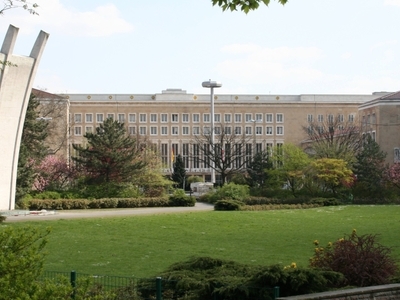 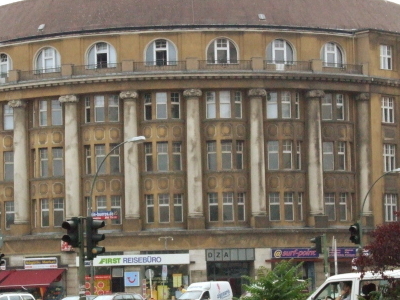 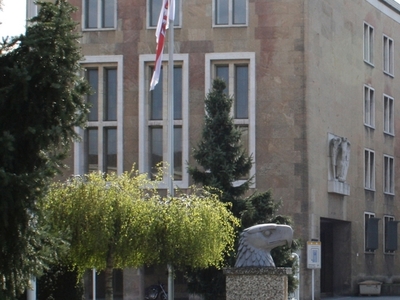 Platz der Luftbrücke is a landmarked square and transport node in Berlin, Germany, on the border between the localities of Tempelhof and Kreuzberg. The entrance to the former Tempelhof International Airport is on the square. The buildings around the square are now mostly government agencies, in particular police headquarters. The name of the square commemorates the Berlin airlift of 1948/49 (German: Luftbrücke, 'air bridge') in which Tempelhof was the main airfield used; the Berlin Airlift Monument is in the square.

Buildings and Monuments:
On the east side of the square are the airport departure building, designed by Ernst Sagebiel, and administration building, in the same style. These prefigure the unrealised designs for the Nazi capital, Welthauptstadt Germania; its North-South Axis would have run approximately 1 km west of the square and the airport entrance would have faced the triumphal arch.

On the southwest side of the square are apartment and business buildings designed by Bruno Möhring in the first phase of the development of the Tempelhof district before the First World War. The Neu-Tempelhof "garden city" development was created inside this ring of 5-storey buildings in the interwar years, designed by Fritz Bräuning.

In front of the airport entrance is the Berlin Airlift Monument (Luftbrückendenkmal; properly the Denkmal für die Opfer der Luftbrücke, 'Monument for the Victims of the Airlift') erected in 1951; it was the first major monument in West Berlin after the war. An inscription on the base records the names and ranks of the 78 people killed in accidents during the Berlin Blockade. Its design, by Eduard Ludwig (who won the contest to design it) features 3 arcs pointing west to symbolise the 3 air corridors that were the city's lifeline, as a result of which Berliners also call it the Hungerkralle (hunger claw) or Hungerharke (hunger rake). An identical counterpart reaching towards Berlin was erected in 1985 by the German-American Airlift Association at the southeast corner of the Frankfurt Airport, directly adjacent to the A5 Autobahn. Since 1988, a smaller copy has also stood at Celle Air Base in Lower Saxony.

Near the entrance to the departure building is a statue of an eagle's head. According to the inscription on the base, this is all that remains of the 4.5 m statue of an eagle, designed by Sagebiel and executed by the sculptor Walter Lemcke, which stood on the roof of the building and was visible from a considerable distance. Contrary to the assumptions of many, it grasped in its claws not a swastika (like the eagle which symbolised the Third Reich) but a globe (like the planned summit of the Great Hall designed for Germania). In 1962 it was removed to permit the installation of new radar equipment and sent to the museum at the United States Military Academy at West Point. The U.S. Air Force returned it to the people of Berlin and since 1985 the part of the square where it stands has been Eagle Square.

Here's the our members favorite photos of "Plazas and Squares in Berlin". Upload your photo of Platz der Luftbrücke!

Going to Platz der Luftbrücke? Get answers from our friendly locals

Plazas and Squares in Berlin

Plazas and Squares in Germany