Palace of the Republic 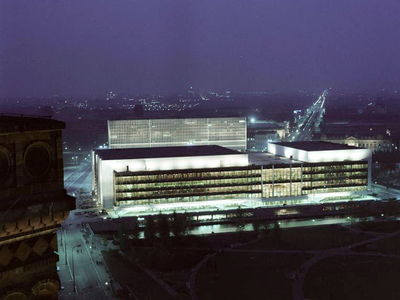 The Palace of the Republic (German: Palast der Republik) in Berlin was the seat of the parliament of the German Democratic Republic, the Volkskammer (People's Chamber), and also served various cultural purposes. Located between Schlossplatz and the Lustgarten (referred to jointly as Marx-Engels-Platz from 1951 to 1994) on an island in the River Spree, it also housed two large auditoria, art galleries, a theatre, 13 restaurants, a bowling alley, a post office, and a discothèque. On 23 August 1990, the Volkskammer ratified the treaty on German reunification, which was later also confirmed by the Bundestag in Bonn. The building was constructed between 1973 and 1976 on the site of the former Berliner Stadtschloss (City Palace), and was completely demolished by 2008 to make room for a reconstruction of the Stadtschloss, which began in 2013.

Here's the our members favorite photos of "Parliaments in Berlin". Upload your photo of Palace of the Republic!

Going to Palace of the Republic? Get answers from our friendly locals

Love parliaments? Check these out;

Top Voted Parliaments Around the World