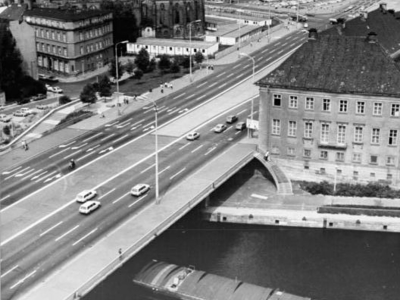 Mühlendamm refers to the Mühlendammbrücke (Mill Dam Bridge) in East Berlin's Mitte district and the road crossing the Spree river between Gertaudenstraße and Molkenmarkt. Originally a dam was built at this location used for both crossing the river and for water mills. Later, after the installation of defenses, a lock enabled frequent changes in the crossing of the Spree. The current concrete bridge was built in 1968 and is part of the east-west road link to Berlin's city center.

Its earliest history was as a ford on the trading route between Teltow (in the direction of Halle and Wittenberg) and the Barnim (in the direction of Oderberg and Stettin) crossing the shallow river spree. In the last third of the 12th century, this new Spree passage competed with existing crossings at Spandau and Köpenick. At the ford was a bridge that was plugged into a dam to generate water power for mills. This was the foundation of the village of Cölln and Alt-Berlin.

Here's the our members favorite photos of "Bridges in Berlin". Upload your photo of Mühlendamm!

Going to Mühlendamm? Get answers from our friendly locals