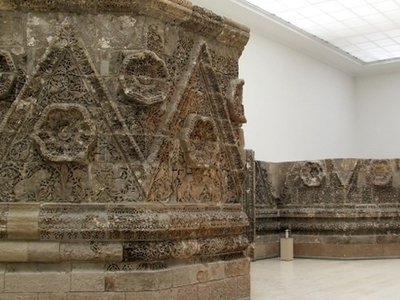 The Mshatta Facade is the decorated part of the facade of the 8th century Umayyad residential palace of Qasr Mshatta, one of the Desert Castles in Jordan, which is currently installed in the south wing of the Pergamon Museum in Berlin, Germany. It is part of the permanent exhibition of the Pergamon Museum of Islamic Art dedicated to Islamic art from the 8th to the 19th centuries.

The facade belonged to the Qasr Mshatta or Mshatta palace, which was excavated about 30 km south of the contemporary Jordanian capital of Amman. It is thought to have served as a winter residence and storage halls during the Umayyad period. The building of the palace probably dates to the era of the caliph Al-Walid II (743-744). After Al Walid was murdered, it was left incomplete and later ruined in an earthquake. The sections of the outer wall remaining in situ are much plainer.

Here's the our members favorite photos of "Museums in Berlin". Upload your photo of Mshatta Facade!

Going to Mshatta Facade? Get answers from our friendly locals