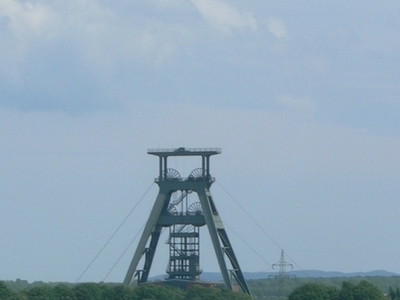 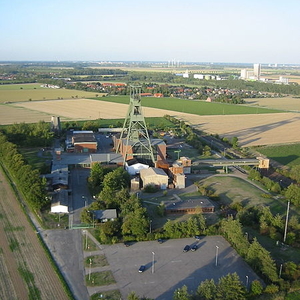 The pit Konrad (Schacht Konrad) is a former iron ore mine proposed as a deep geological repository for medium- and low level radioactive waste in the city Salzgitter in the Metropolitan region Hannover-Braunschweig-Göttingen-Wolfsburg in southeast Lower Saxony, Germany, located between Hildesheim and Braunschweig. It has two shafts : Konrad I and Konrad II.
History:
The iron ore deposits have been mined since the start of the industrialization in the Salzgitter area. The first activities began in 1867. The shaft Konrad is the youngest of the former iron ore mines in this region. It has two shafts, of which Schacht Konrad I, is approximately 1232 meters and Schacht Konrad II is around 999 meters deep. The mining operation on Konrad lasted from 1961 to 1976. During this period, a total of 6.7 million tonnes of iron ore were retrieved.
Authorization For Radioactive Waste Disposal:
The shaft Konrad is an unusually dry iron ore mine. Since this is one of the criteria for a deep final repository for radioactive waste, the studies on the possibility of a disposal site were started in 1975. The Physikalisch-Technische Bundesanstalt (PTB) started the plannings procedure on 31 August 1982. The Bundesamt für Strahlenschutz, the Ministry of Environment of Lower Saxony and the Deutsche Gesellschaft zum Bau und Betrieb von Endlagern für Abfallstoffe discussed the issue between September 1992 and March 1993. On 22 May 2002 the license for the final deep geological storage of medium- and low level radioactive waste was approved.
Foundation GmbH:
For the takeover of state-specific responsibilities, which the city and the region Salzgitter bear, a foundation GmbH is proposed by the Federal Ministry for Environment, Nature Conservation and Nuclear Safety. The energy companies initially bring in 30 million euros with further payments over an initial period of 30 years of service. The federal government will contribute from 2009 to 2043 700,000 euros per year. The fund will compensate for the lack of tax revenues since the operation of the shaft Konrad like any other business uses the infrastructure in the area of Salzgitter but is relieved from VAT and local tax measures.

Here's the our members favorite photos of "Mines in Lower Saxony". Upload your photo of Konrad Mine!

Going to Konrad Mine? Get answers from our friendly locals

Love mines? Check these out;

Top Voted Mines Around the World