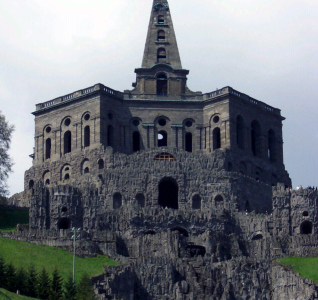 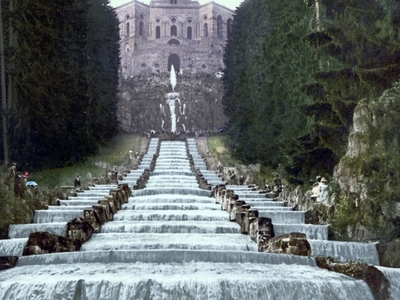 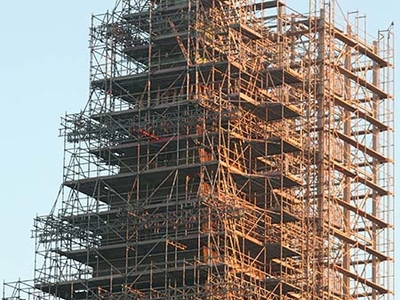 The Hercules monument is an important landmark in the German city of Kassel. It is located in the "Bergpark (Mountainpark) Wilhelmshöhe", northern Hesse, Germany.
Hercules is a copper statue depicting the ancient Greek demigod Heracles (Gr. Ηρακλής, German Herkules). The statue is located at the top of a Pyramid, which stands on top of the Octagon; the statue and the other parts of the monument were constructed at different times. Today "Hercules" refers not only to the statue, but the whole monument, including the Octagon and Pyramid. The monument is the highest point in the Wilhelmshöhe Bergpark.
The monument is located in Bad Wilhelmshöhe, on the Eastern ridge of the Habichtswald. It was built in an artificial dell of the Karlsberg (526m above sea level) on the most western and at the same time highest location (515 m) of the line of sight Schloss Wilhelmshöhe – Hercules. On 23 June 2013 the Mountainpark and the Hercules were proclaimed as World heritage site during the UNESCO meeting in Phnom Penh.
Water features:
For the first time the water features took place on 3 June in 1714. Today during the summer (from May until October every Wednesday and Sunday afternoon) visitors can attend this event. Additionally, every first Saturday of the months of June, July, August and September this event takes place during the evening with lights of different colors illuminating the water, the fountain and the different monuments. Every time about 350.000 liters (92,000 gallons) of water are needed and visitors can follow the water's way starting from the Hercules monument and ending at the big lake of the castle Wilhelmshöhe. The water runs down the cascades, the Steinhöfer's waterfall, the devil's bridge, until it tumbles down the aqueduct before finally arriving at the lake of the castle where a fountain of about 50 meters ends the spectacle. This whole system relies on natural pressure from reservoirs and underground pipes whose locks are opened manually. This system has been in place for more than 300 years.
Octagon & statue:
The Hercules monument has a total height of 70.5 meters. 32.65 meters are accounted for by the Octagon; 29.60 meters for the Pyramid and 8.25 meters for the Hercules statue itself. The height difference between top of the statue and the bottom of the cascades is 179 meters.The Cascades are a 250m long stone structure that forms gigantic waterstairs.

Here's the our members favorite photos of "Landmarks in Germany". Upload your photo of Hercules Monument!

Going to Hercules Monument? Get answers from our friendly locals

Love landmarks? Check these out;

Top Voted Landmarks Around the World