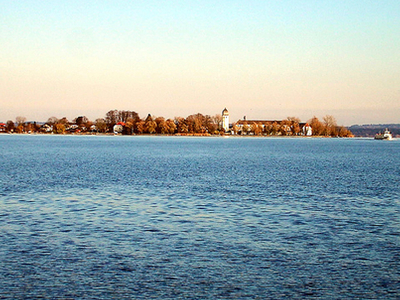 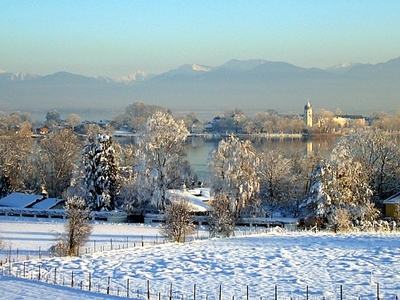 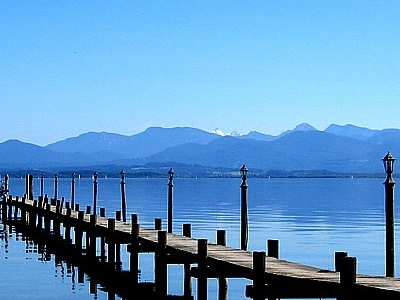 Chiemsee is a freshwater lake in Bavaria, Germany, between Rosenheim, Germany, and Salzburg, Austria. It is often called the Bavarian Sea. The rivers Tiroler Achen and Prien flow into the lake, from the South; the river Alz, out of it, towards the North. The Chiemsee is divided into the bigger, north section, in the northeast, called Weitsee, and the Inselsee, in the southwest.The region around the Chiemsee is Chiemgau and is a famous recreation area.

The Chiemsee was formed, like many other pre-alpine lakes, at the end of the last ice age about 10,000 years ago from a hollow carved out by a glacier (a Zungenbecken). Originally the lake covered an area of almost 240 km sq, which is about three times its present area.

Islands:
Two of the main islands on the lake are Herrenchiemsee (the biggest one with an area of 238 ha) and Frauenchiemsee (15.5 ha), also called Herreninsel (gentlemen's island) and Fraueninsel (ladies' island), respectively. The third main island, Krautinsel (cabbage island), is the smallest (3.5 ha) among the three and is uninhabited.

Here's the our members favorite photos of "Lakes in Bavaria". Upload your photo of Chiemsee!

Going to Chiemsee? Get answers from our friendly locals

Get in touch with 1 Touristlink members who want to visit Chiemsee or with Swapneel Waghmare and Mirekhefner who already have been here.