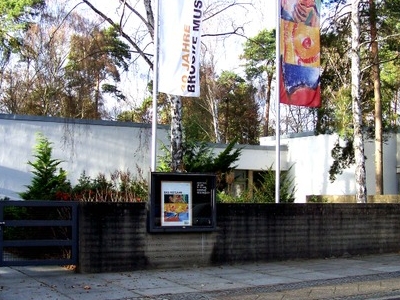 The Brücke Museum in Berlin houses the World's largest collection of works by Die Brücke ("The Bridge"), an early 20th-century expressionist movement. Opened in 1967, it features around 400 paintings and sculptures and several thousand drawings, watercolours and prints by members of Die Brücke, the movement founded in 1905 in Dresden. The collection includes a donation from the painter Karl Schmidt-Rottluff to the state of Berlin, and a later donation from Erich Heckel featuring key works from the early years of the movement.

Location:
The museum is located in an idyllic natural setting in Dahlem, not far from the former studio of the sculptor Arno Breker. It conducts research into works by the founding members of the movement and their early 20th century contemporaries. The museum presents both a continually changing selection of its own works, and frequent special exhibitions of works on loan.

Here's the our members favorite photos of "Museums in Berlin". Upload your photo of Brücke Museum!

Going to Brücke Museum? Get answers from our friendly locals