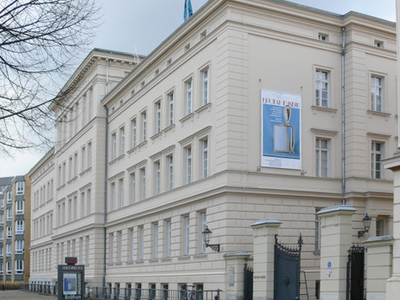 The Bröhan Museum is a museum of art and design in Berlin. It is devoted to Art Nouveau, Art Deco and functionalism, and occupies a late-classicist former barracks in Charlottenburg, opposite Charlottenburg Palace. The museum is organised into "room ensembles", each containing examples of art, design and furniture from a particular phase in late-19th/early-20th century art history. Glassware, metalware and ceramics are displayed alongside paintings, in rooms furnished and decorated accordingly. The museum also hosts temporary exhibitions on related themes.

Many major figures from the history of decorative art and furniture-making are represented, including Friedrich Adler, Peter Behrens, Emile Gallé, Josef Hoffmann, Georg Jensen, Archibald Knox, Bruno Paul, and Henry van de Velde. The painting collection is focused on the Berlin Secession, and includes Hans Baluschek, Walter Leistikow, Lesser Ury and Karl Hagemeister. The museum's founder, Karl H. Bröhan, donated his collection to the city of Berlin in 1981. It had already been on display in Dahlem since 1973, before moving into its current location in 1983.

Here's the our members favorite photos of "Museums in Berlin". Upload your photo of Bröhan Museum!

Going to Bröhan Museum? Get answers from our friendly locals