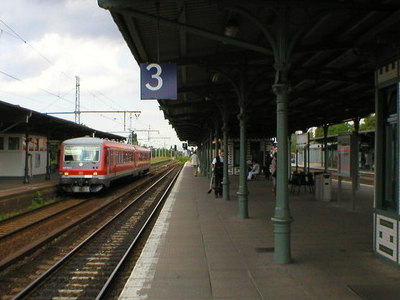 Berlin-Schöneweide is a railway station in the Treptow-Köpenick district of Berlin. It is served by the S-Bahn, buses and trams. It formerly was a terminal for long-distance and regional trains, but the last of these ran in 2011.

The station was opened as a halt in the outskirts of the Landgemeinde (rural municipality) of Niederschöneweide on 24 May 1868 on the Berlin–Görlitz railway. It was originally called Neuer Krug (new tavern), the name of a nearby inn. In 1874, it was renamed Neuer Krug-Johannisthal, after the rural municipality of Johannisthal, which was also near the station. In 1880–1882, it was rebuilt as a station.

Here's the our members favorite photos of "Railway Stations in Berlin". Upload your photo of Berlin-Schöneweide Station!

Going to Berlin-Schöneweide Station? Get answers from our friendly locals