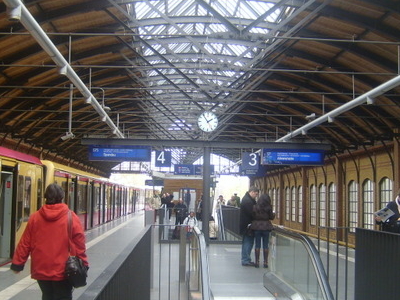 Bellevue is a railway station on the Berlin Stadtbahn in the Hansaviertel district of Berlin, Germany. It is served by Berlin S-Bahn trains. The station is named after Bellevue Palace, the residence of the President of Germany. Work on the station started in 1875 and it was opened together with most other Berlin Stadtbahn stations on 7 February 1882. Today, it is one of the two Stadtbahn stations still in the original state. The other station is Hackescher Markt railway station. The station has been a listed building since 1987. Berlin Victory Column, Spree river, Tiergarten Park and Bellevue Palace may be reached in the nearby vicinity.

Here's the our members favorite photos of "Railway Stations in Berlin". Upload your photo of Berlin Bellevue Station!

Going to Berlin Bellevue Station? Get answers from our friendly locals