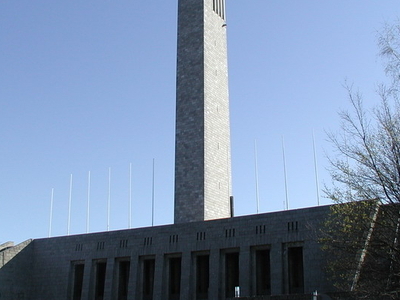 The Bell Tower of Berlin Olympic Stadium was a 77 metres high observation tower that was built in 1934 after plans by Professor Werner March. The steel skeleton construction was faced with dressed limestone.

After the Second World War the Soviet troops accidentally set the tower's contents on fire and it was no longer stable. Therefore the British engineers blew it up in 1947. The Olympic Bell - weighing 9.60 tons, which had survived the fire and remained in its place in the tower - fell 77 metres, cracked and has been unable to sound since then. In 1956 the bell was rescued, only in order to be used as a practice target using anti-tank ammunition. The old bell survives to this day and serves now as a memorial.

Between 1960 and 1962 the tower was rebuilt following the old plans, although the tower is now 77.17 metres high. In it hangs the present Olympic Bell weighting 4.50 tons with the German Federal Eagle, the Brandenburg Gate and the texts between the Olympic Rings (in German language): Olympic Games 1936 and I call the youth of the world. The bell rings the note F sharp. The tower is an important tourist destination offering a panorama of Berlin, Spandau, the Havel Valley, Potsdam, Nauen and Hennigsdorf.