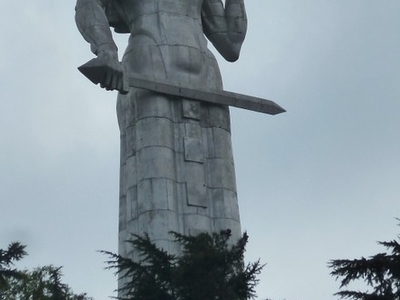 Kartlis Deda (Georgian: ქართლის დედა; Mother of Kartli) is a monument in Georgia’s capital Tbilisi, which has become a symbol of the city.
The statue was erected on the top of Sololaki hill in 1958, the year Tbilisi celebrated its 1500th anniversary. Prominent Georgian sculptor Elguja Amashukeli designed the twenty-metre aluminium figure of a woman in Georgian national dress. She symbolizes the Georgian national character: in her left hand she holds a bowl of wine to greet those who come as friends, and in her right hand is a sword for those who come as enemies.

Here's the our members favorite photos of "Monuments in Tbilisi". Upload your photo of Kartlis Deda!

Going to Kartlis Deda? Get answers from our friendly locals

Fatih Kibar is the only Touristlink member to visit Kartlis Deda. Have you been here? Click here to save it.