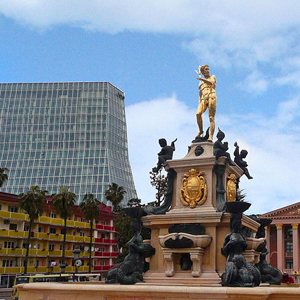 A popular tourist destination for vacationing around the Caucasus, Batumi, featuring an exclusive night-life within its beach-front clubs, is also known as the ‘Party Capital’ within this region. Serving as a strategic port-town and a major commercial center, Batumi is one of the most important tourist resort zones on the Georgian Black Sea littoral. Located within a sub-tropical area, Batumi, rich in agricultural produce displays mild winters and warm summers, which are most agreeable for the production of citrus fruits and tea largely grown in this region.

Well connected by bus and train services within Georgia, Batumi, served by an international airport is also providing regular ferry services to/from Ukraine and Russia. However, as a favorite holiday destination to Armenians, Azerbaijanis, Turks and Georgians, the economy of this port town largely relies on tourism. Some of the most popular tourist attractions in Batumi include the Nurigeli Lake, an Oceanarium, Batumi Botanical Garden, the Old Mosque, Orthodox – Catholic and Armenian Churches, the Remains of Gonio Fortress and the quaint Black Sea.

Here's the our members favorite photos of "Cities in Georgia". Upload your photo of Batumi!

Going to Batumi? Get answers from our friendly locals