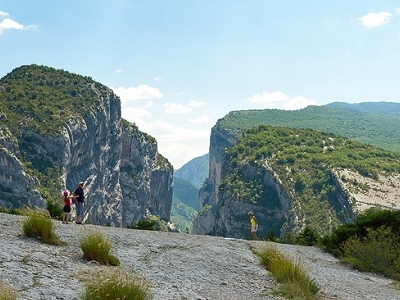 The Verdon Gorge (in French: Gorges du Verdon or Grand canyon du Verdon), in south-eastern France (Alpes-de-Haute-Provence), is a river canyon that is often considered to be one of Europe's most beautiful. It is about 25 kilometres long and up to 700 metres deep. It was formed by the Verdon River, which is named after its startling turquoise-green colour, one of the canyon's most distinguishing characteristics. The most impressive part lies between the towns of Castellane and Moustiers-Sainte-Marie, where the river has cut a ravine up to 700 metres down through the limestone mass. At the end of the canyon, the Verdon river flows into the artificial lake of Sainte-Croix-du-Verdon (in French: Lac de Sainte-Croix).

Because of its proximity to the French Riviera, the canyon is very popular with tourists, who can drive around its rim, rent kayaks or hike. The limestone walls, which are several hundreds of metres high, attract many rock climbers. It is considered an outstanding destination for multi-pitch climbing. There are routes encompassing cracks, pillars and seemingly endless walls. The climbing is generally of a technical nature, and there are over 1,500 routes, ranging from 20m to over 400m.

Here's the our members favorite photos of "Canyons in Provence-Alpes-Cote d'Azur". Upload your photo of Verdon Gorge!

Going to Verdon Gorge? Get answers from our friendly locals

Get in touch with 2 Touristlink members who want to visit Verdon Gorge or with Ma Ne, Valeri Sokolov and 2 others who already have been here.

Love canyons? Check these out;

Top Voted Canyons Around the World