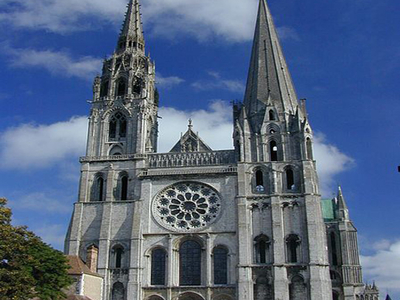 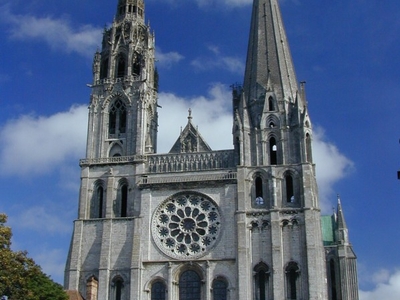 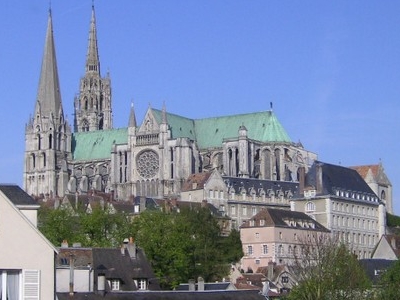 The French medieval Cathedral of Our Lady of Chartres (French: Cathédrale Notre-Dame de Chartres) is a Latin Rite Catholic cathedral located in Chartres, about 80 kilometres (50 mi) southwest of Paris. It is considered one of the finest examples of the French High Gothic style. The current cathedral, mostly constructed between 1193 and 1250, is one of at least five which have occupied the site since the town became a bishopric in the 4th century.

Since at least the 12th century the cathedral has been an important destination for travellers – and remains so to this day, attracting large numbers of Christian pilgrims, many of who come to venerate its famous relic, the Sancta Camisa, said to be the tunic worn by the Virgin Mary at Christ's birth, as well as large numbers of secular tourists who come to see this UNESCO World Heritage Site.


Plan and elevation
The plan is cruciform. A two bay narthex at the western end opens into a seven bay nave leading to the crossing, from which wide transepts extend three bays each to north and south. East of the crossing are four rectangular bays terminating in a semicircular apse.

Windows
Perhaps the most distinctive feature of Chartres Cathedral is the extent to which architectural structure has been adapted to meet the needs of stained glass. The use of a three-part elevation with external buttressing allowed for far larger windows than earlier designs, particularly at the clerestory level. Most cathedrals of the period had a mixture of windows containing plain or grisaille glass and windows containing dense stained glass panels, with the result that the brightness of the former tended to diminish the impact and legibility of the latter.

12th-Century Windows
The majority of the windows now visible at Chartres were made and installed between 1205 and 1240, however four lancets preserve panels of Romanesque glass from the 12th century which survived the fire of 1195. Three of these are located beneath the rose in the west façade; the Passion window to the south, the Infancy of Christ in the Centre and a Tree of Jesse to the north.

Rose Windows
The cathedral has three large rose windows. The western rose, made c.1215 and 12m in diameter shows the Last Judgement – a traditional theme for west façades. A central oculus showing Christ as the Judge is surrounded by an inner ring of 12 paired roundels containing angels and the Elders of the Apocalypse and an outer ring of 12 roundels showing the dead emerging from their tombs and the angels blowing trumpets to summon them to judgement.

Cathedral school
In the Middle Ages the cathedral also functioned as an important cathedral school. In the early 11th century Bishop Fulbert established Chartres as one of the leading schools in Europe. Although the role of Fulbert himself as a scholar and teacher has been questioned, perhaps his greatest talent was as an administrator, who established the conditions in which the school could flourish, as well as laying the foundations for the rebuilding of the cathedral after the fire of 1020.

Popular culture
Orson Welles famously used Chartres as a visual backdrop and inspiration for a montage sequence in his film F For Fake. Welles’ semi-autobiographical narration spoke to the power of art in culture and how the work itself may be more important than the identity of its creators. Feeling that the beauty of Chartres and its unknown artisans and architects epitomized this sentiment, Welles, standing outside the cathedral and looking at it.

Here's the our members favorite photos of "Churches in Versailles". Upload your photo of Chartres Cathedral!

Going to Chartres Cathedral? Get answers from our friendly locals

Get in touch with 9 Touristlink members who want to visit Chartres Cathedral or with Deepak Gupta, David Urmann and 10 others who already have been here.