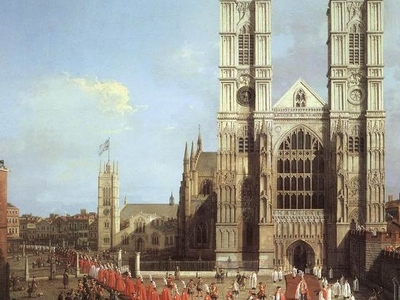 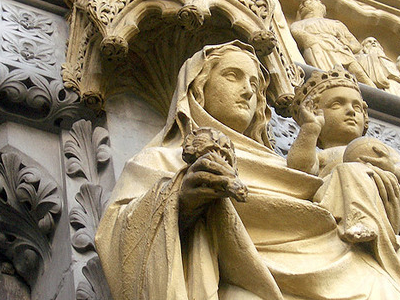 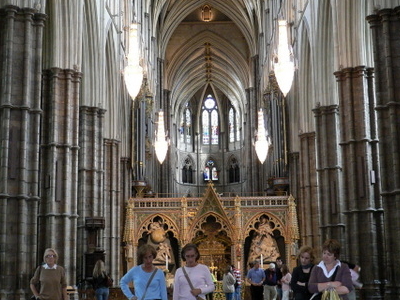 The Collegiate Church of St Peter at Westminster, popularly known as Westminster Abbey, is a large, mainly Gothic church, in the City of Westminster, London, United Kingdom, located just to the west of the Palace of Westminster. It is the traditional place of coronation and burial site for English, later British and later still (and currently) monarchs of the Commonwealth realms. The abbey is a Royal Peculiar and briefly held the status of a cathedral from 1540 to 1550.

Westminster Abbey is a collegiate church governed by the Dean and Chapter of Westminster, as established by Royal charter of Queen Elizabeth I in 1560, which created it as the Collegiate Church of St Peter Westminster and a Royal Peculiar under the personal jurisdiction of the Sovereign. The members of the Chapter are the Dean and four residentiary canons, assisted by the Receiver General and Chapter Clerk. One of the canons is also Rector of St Margaret's Church, Westminster, and often holds also the post of Chaplain to the Speaker of the House of Commons.

History
According to a tradition first reported by Sulcard in about 1080, the Abbey was first founded in the time of Mellitus (d. 624), Bishop of London, on the present site, then known as Thorn Ey (Thorn Island); based on a late tradition that a fisherman called Aldrich on the River Thames saw a vision of Saint Peter near the site.

This seems to be quoted to justify the gifts of salmon from Thames fishermen that the Abbey received in later years. In the present era, the Fishmonger's Company still gives a salmon every year. The proven origins are that in the 960s or early 970s, Saint Dunstan, assisted by King Edgar, installed a community of Benedictine monks here.

Burials and Memorials
Henry III rebuilt the Abbey in honour of the Royal Saint Edward the Confessor whose relics were placed in a shrine in the sanctuary. Henry III himself was interred nearby, as were many of the Plantagenet kings of England, their wives and other relatives.

In addition there are two service bells, cast by Robert Mot, in 1585 and 1598 respectively, a Sanctus bell cast in 1738 by Richard Phelps and Thomas Lester and two unused bells—one cast circa 1320, by the successor to R de Wymbish, and a second cast in 1742, by Thomas Lester.

Museum
The Westminster Abbey Museum is located in the 11th-century vaulted undercroft beneath the former monks' dormitory in Westminster Abbey. This is one of the oldest areas of the Abbey, dating back almost to the foundation of the Norman church by Edward the Confessor in 1065. This space has been used as a museum since 1908.

Here's the our members favorite photos of "Churches in London". Upload your photo of Westminster Abbey!

Going to Westminster Abbey? Get answers from our friendly locals

Get in touch with 16 Touristlink members who want to visit Westminster Abbey or with Carlos Oribe, Voyageseuropa and 49 others who already have been here.