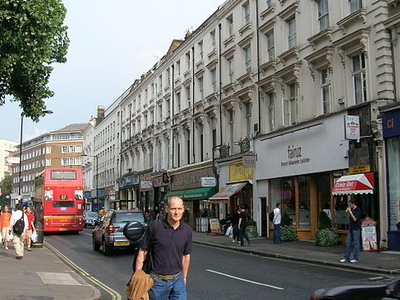 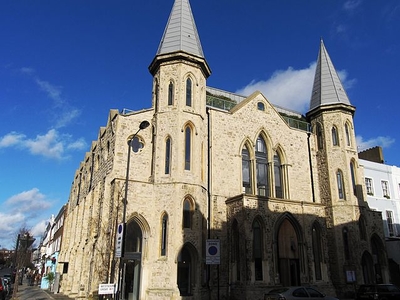 Westbourne Grove is a retail road running across Notting Hill, in the Royal Borough of Kensington and Chelsea, a section of west London. It runs from Kensington Park Road in the west to Queensway in the east, crossing over Portobello Road. It contains a mixture of independent and chain retailers, and has been termed both "fashionable" and "up-and-coming". The Notting Hill Carnival passes along the central part of Westbourne Grove.

Shopping:
There are a number of popular shopping destinations located on Westbourne Grove and adjoining streets, pre-eminently: Portobello Market, Queensway and Ledbury Road. On 9 August 1997, authoritative weekly newsagent-magazine Time Out featured West London, selecting Westbourne Grove as the half-city's representative: "Seeking a key shopping road symbolic of western aspirations, we decided that preposterously fashionable Westbourne Grove, or 'Westbourne Village', has it all. It was here that Madonna headed during breaks in filming "Evita" - to the funky boutiques, the avant-garde florists, the designer jewellery and futuristic furniture (at millennial prices)."

In February 2004, the London Plan was first issued and, paired with Queensway, designated Westbourne Grove as one of Greater London's major centres. Around 2007, the road's eastern Bayswater-end, underwent a rapid period of transformation, east of Chepstow Road. Upon lease expiry, rents increased significantly and pricing-out many incumbent family businesses, which were replaced by fashionable / prestige restaurants and shops.

Here's the our members favorite photos of "Famous Streets near Kensington and Chelsea". Upload your photo of Westbourne Grove!

Going to Westbourne Grove? Get answers from our friendly locals

Randy Haglund is the only Touristlink member to visit Westbourne Grove. Have you been here? Click here to save it.