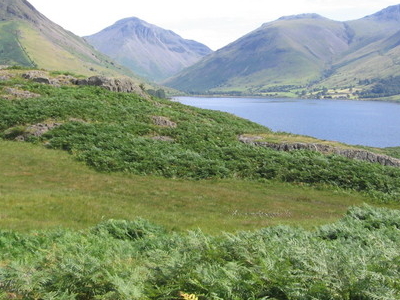 Wast Water or Wastwater is a lake located in Wasdale, a valley in the western part of the Lake District National Park, England. The lake is approximately 4.6 kilometres (almost 3 miles) long and 600 metres wide. It is the deepest lake in England at 79 metres (258 feet), and is owned by the National Trust. It is one of the finest examples of a glacially 'over-deepened' valley. The surface of the lake is about 200 feet above sea level, while its bottom is over 50 feet below sea level.

The head of the Wasdale Valley is surrounded by some of the highest mountains in England, including Scafell Pike, Great Gable and Lingmell. On September 9, 2007, Wast Water was announced as the winner of a vote to determine "Britain's Favourite View" by viewers of ITV. The steep slopes on the south eastern side of the lake, leading up to the summits of Whin Rigg and Illgill Head, are known as the "Wastwater Screes" or on some maps as "The Screes".

"Wastwater" comes from "Wasdale" plus English "water". The valley is pronounced as in was, not with a hard a: the name of the lake similarly but with a soft "s" as in "thou wast". The lake is named "Wast Water" on Ordnance Survey maps but the spelling "Wastwater" is used with roughly equal frequency, including by its owner, the National Trust, along with the Cumbria Tourist Board, and the Lake District National Park Authority.

The Wasdale Lady in the Lake, Margaret Hogg, was murdered and her body was disposed of in the lake. She was found after eight years, with her body preserved like wax due to the lack of oxygen in the water.

Here's the our members favorite photos of "Lakes in Lake District National Park". Upload your photo of Wast Water!

Going to Wast Water? Get answers from our friendly locals