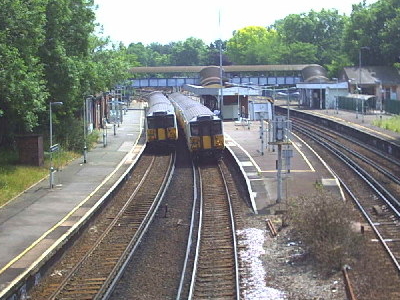 Wandsworth Common railway station is in the London Borough of Wandsworth in south London. The station and all trains serving it are operated by Southern, and it is in Travelcard Zone 3.

The West End of London and Crystal Palace Railway (WELCR) opened the first Wandsworth Common slightly to the north of the present station on 1 December 1856. From the outset the line was worked by the London, Brighton and South Coast Railway (LB&SCR), and then only ran from Crystal Palace to Wandsworth Common. There were plans to extend it to join with the London and South Western Railway (L&SWR) main line nearby, thereby providing access to London Waterloo railway station, but these were rejected by that railway. The (WELCR) therefore extended its line to Battersea Wharf, and it was purchased by the LB&SCR in 1859,.