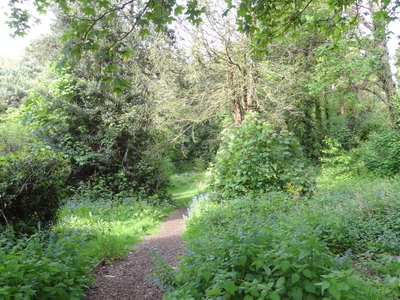 The Wood is a public park in Surbiton in the Royal Borough of Kingston upon Thames in London. Part of it is a bird sanctuary named after the naturalist Richard Jefferies and managed by the London Wildlife Trust. The 1.5 hectare site is designated as a Local Nature Reserve called 'The Wood and Richard Jefferies Bird Sanctuary'.

The Woods was a nineteenth century house which had a lake and woods in its grounds. In the 1930s the house was demolished, and in 1947 Surbiton Council compulsorily purchased the site and turned it into a park. In 1980 the upper part of The Park was fenced off to form the bird sanctuary, which has been managed by the London Wildlife Trust since 1987.

The site is wooded, and has typical woodland birds such as great spotted woodpeckers and tawny owls. Invertebrates include stag beetles. There is access from Oak Hill Grove.

Here's the our members favorite photos of "Nature Reserves in London". Upload your photo of The Wood!

Going to The Wood? Get answers from our friendly locals