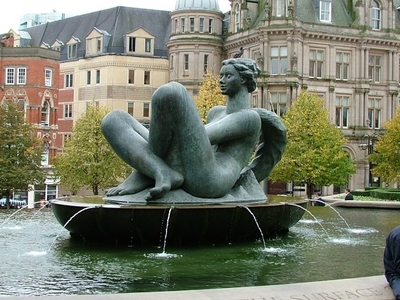 The River, locally known as The Floozie in the Jacuzzi is an artwork in Victoria Square, Birmingham, England.An international design competition was held for a central water feature in the square, which was won by Dhruva Mistry. Construction commenced in 1992 and was completed in 1994, when the square was officially reopened by Diana, Princess of Wales.

The water in the pool flows at a rate of 3,000 gallons per minute,into a lower pool, in which is another bronze sculpture, Youth. The sculpture is 1.5 m (5 ft) tall and 1.5 m (5 ft) in diameter. It depicts a boy and a girl facing each other at either ends of a fountain. Beside them are an Egg and a cone. The surrounding lower pool is also paved with Wattscliff sandstone, on the floor of which is a bas-relief of six large salmon. The combination of River and Youth won a 'Fountain of the Year' award in 1995.

Here's the our members favorite photos of "Fountains in Birmingham". Upload your photo of The River!

Going to The River? Get answers from our friendly locals