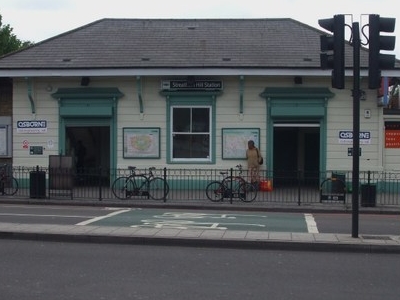 Streatham Hill railway station is one of three stations serving the district of Streatham, in the London Borough of Lambeth. The wooden station building at street level faces the busy Streatham High Road (A23) at the junction with Leigham Court Road. Services are operated by Southern. Access to the platforms - which are in a cutting below street level and which continue under a bridge beneath the road - is possible via a pair of staircases or lifts. A project to replace the staircases and introduce lift access was completed in 2009.

Streatham Hill railway station was opened by the West End of London and Crystal Palace Railway on 1 December 1856, originally being named simply Streatham. Trains were operated from the outset by the London, Brighton and South Coast Railway. At some stage it was renamed Streatham and Brixton Hill before finally settling with its present name in 1869.

Here's the our members favorite photos of "Railway Stations near London Borough of Lambeth". Upload your photo of Streatham Hill Railway Station!

Going to Streatham Hill Railway Station? Get answers from our friendly locals