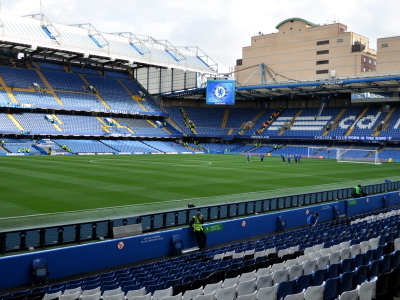 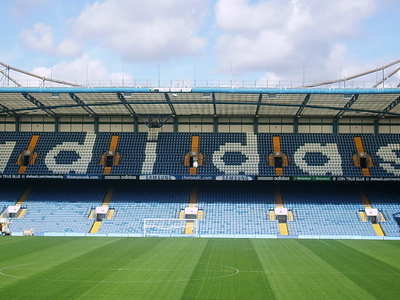 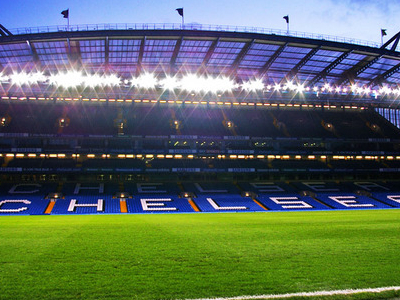 Stamford Bridge is a football stadium located in Fulham, London, SW6 1HS. It is the home ground of Chelsea F.C.. The stadium is located within the Moore Park Estate also known as Walham Green and is often referred to as simply The Bridge. The capacity is 41,798, making it the eighth largest ground in the Premier League.

Opened in 1877, the stadium was used by the London Athletic Club until 1905, when new owner Gus Mears founded Chelsea Football Club to occupy the ground; Chelsea have played their home games there ever since. It has undergone numerous major changes over the years, most recently in the 1990s when it was renovated into a modern, all-seater stadium.

Stamford Bridge has been used as a venue for England international matches, FA Cup Finals, FA Cup semi-finals and Charity Shield games. It has also hosted numerous other sports, such as cricket, Rugby union, speedway, greyhound racing, baseball and American football. The stadium's highest official attendance is 82,905, for a league match between Chelsea and Arsenal on 12 October 1935.

Other Uses:
Stamford Bridge was the venue of the FA Cup Final from 1920 to 1922, before being replaced by Wembley Stadium in 1923. It has staged ten FA Cup semi-finals, ten Charity Shield matches, and three England matches, the last in 1932. It was one of the home venues for the representative London XI team that played in the original Inter-Cities Fairs Cup. The team played the home leg of the two-legged final at Stamford Bridge, drawing 2–2 with FC Barcelona; they lost the away leg 6–0, however.

Other Features:
When Stamford Bridge was redeveloped in the Ken Bates era, many additional features were added to the complex, including two hotels, apartments, bars, restaurants, the Chelsea Megastore, and an interactive visitor attraction called Chelsea World of Sport. The intention was that these facilities would provide extra revenue to support the football side of the business, but they were less successful than hoped, and before the Abramovich takeover in 2003, the debt taken on to finance them was a major burden on the club. Soon after the takeover, a decision was taken to drop the "Chelsea Village" brand and refocus on Chelsea as a football club. However, the stadium is sometimes still referred to as part of Chelsea Village or "The Village".

Here's the our members favorite photos of "Stadiums near Kensington and Chelsea". Upload your photo of Stamford Bridge!

Going to Stamford Bridge? Get answers from our friendly locals

Get in touch with 1 Touristlink members who want to visit Stamford Bridge or with Mayara Bona who already have been here.