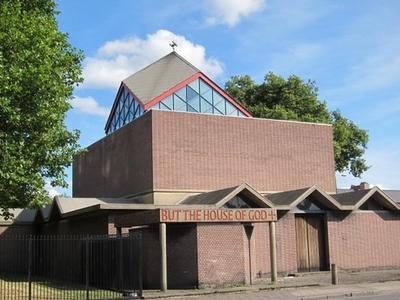 St Paul's Bow Common is a 20th-century church in Bow, London, England. It is an Anglican church in the Diocese of London. The church is at the junction of Burdett Road and St Paul's Way in the London Borough of Tower Hamlets. Built in 1958-60, the building is listed Grade II*. Its architects were Robert Maguire and Keith Murray. The Revd. Gresham Kirkby, a Christian Anarchist, was also involved in the design, and continued as parish priest until 1994, being succeeded by Revd. Prebendary Duncan Ross, who retired in October 2013.

The lettering around the porch reads 'Truly this is none other but the house of God This is the Gate of Heaven' (Genesis 28:17), was carved by Ralph Beyer. The 800 square foot mosaic is by Charles Lutyens. Made from coloured Murano glass tesserae, and taking five years to make, the mosaic is likely to be the largest artist-created contemporary mosaic mural in the British Isles. The church is currently home to Lutyens's 'Outraged Christ'.

On 7 November 2013, the church was judged to be the winner of the National Churches Trust Diamond Jubilee Award for best Modern Church built in the UK since 1953. The awards were judged by architecture critic Jonathan Glancey, chief executive of the Twentieth Century Society Catherine Croft, Sherry Bates, president of the Ecclesiastical Architects and Surveyors Association, and trustee of the National Churches Trust Richard Carr-Archer.

Here's the our members favorite photos of "Churches near London Borough of Tower Hamlets". Upload your photo of St Paul's Bow Common!

Going to St Paul's Bow Common? Get answers from our friendly locals