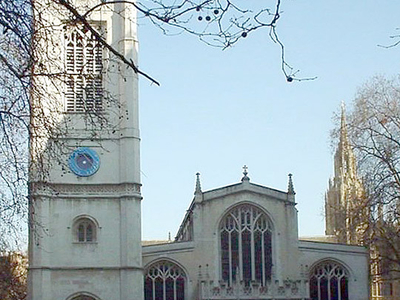 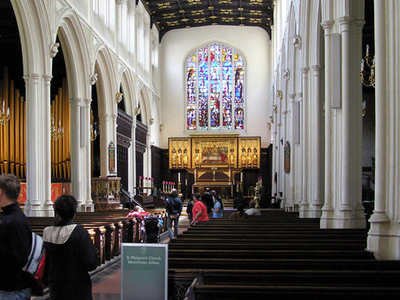 History and Description
Originally founded in the twelfth century by Benedictine monks, so that local people who lived in the area around the Abbey could worship separately at their own simpler parish church, and historically part of the hundred of Ossulstone in the county of Middlesex, St Margaret's was rebuilt from 1486 to 1523. It became the parish church of the Palace of Westminster in 1614, when the Puritans of the seventeenth century, unhappy with the highly liturgical Abbey, chose to hold Parliamentary services in the more "suitable" St Margaret's: a practice that has continued since that time.

Weddings
The church has been a common venue for "society" weddings, including those of Samuel Pepys, former prime ministers Sir Winston Churchill and Harold Macmillan and members of the Bright Young People. The ensemble of St Margaret's, the Palace of Westminster and Westminster Abbey is a World Heritage Site. Members of Parliament and staff members of the House of Lords and House of Commons are permitted to marry in the church.

Other Notable Events
During the First World War, Edward Lyttelton, headmaster of Eton, gave a sermon at the church on the theme of "Loving your enemies". He spoke of his opinion that any post-war treaty should be a just one and not a vindictive one. He had to leave the church after the service by a back door, while a number of demonstrators sang "Rule Britannia" in protest at his attitude.

Choristers
The choristers sing on the regular services and some special services. They consist of 20 boys, aged 9-13, who sing the soprano part and many adults who sing the other parts. Recent special services include a Classic FM concert in Westminster Central Hall, alongside the Parliament Choir. The concert was broadcast on 24 December 2011.

Here's the our members favorite photos of "Churches near City of Westminster". Upload your photo of St Margaret's!

Going to St Margaret's? Get answers from our friendly locals

Get in touch with 12 Touristlink members who want to visit St Margaret's or with Voyageseuropa, Josefina Pepa and 7 others who already have been here.