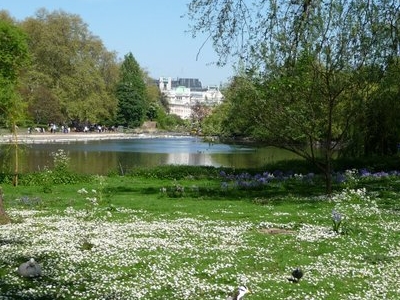 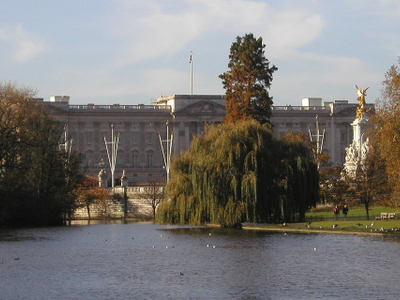 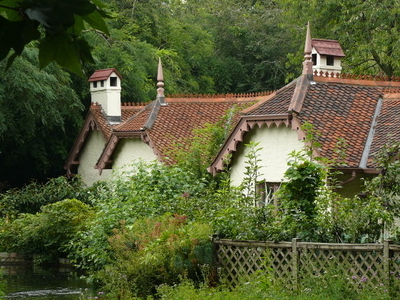 St. James's Park is a 23 hectares (57 acres) park in the City of Westminster, central London - the oldest of the Royal Parks of London. The Park lies at the southernmost tip of the St James's area, which was named after a leper hospital dedicated to St. James the Less.

Geographical location:
St. James's Park is bounded by Buckingham Palace to the west, The Mall and St. James's Palace to the North, Horse Guards to the east, and Birdcage Walk to the south. The park has a small lake, St. James's Park Lake, with two islands, West Island, and Duck Island, which is named for the lake's collection of waterfowl. This includes a resident colony of pelicans, which has been a feature of the park since the first gift of the birds from a Russian ambassador in 1664.

A bridge across the lake affords a view of Buckingham Palace framed by trees and fountains, and a view of the main building of the Foreign and Commonwealth Office, similarly framed, to the east. The park is the most easterly of a near-continuous chain of parks that also comprise (moving westward) Green Park, Hyde Park and Kensington Gardens. The closest London Underground stations are St. James's Park, Victoria, and Westminster.

Here's the our members favorite photos of "City Parks near City of Westminster". Upload your photo of St. James's Park!

Going to St. James's Park? Get answers from our friendly locals

Get in touch with 6 Touristlink members who want to visit St. James's Park or with Voyageseuropa, Ana Gori and 11 others who already have been here.

City Parks in City of Westminster