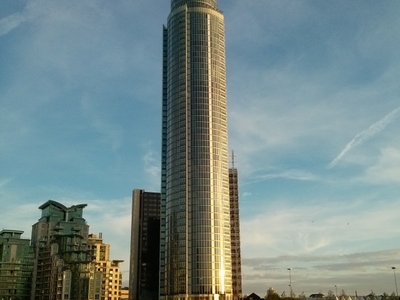 St George Wharf Tower, also known as the Vauxhall Tower or The Tower, is a residential skyscraper in Vauxhall, London, part of the St George Wharf development. At 181 metres (594 ft) tall with 50 storeys, it is the tallest solely residential building in the UK. The building's construction crane was hit by a helicopter in January 2013, causing two deaths.

2013 Helicopter Crash:
On 16 January 2013, at approximately 08:00 GMT, two people died when an AgustaWestland AW109 helicopter struck the construction crane attached to the near-complete building and then crashed onto Wandsworth Road, hitting two cars and igniting two nearby buildings. One of those killed was the helicopter pilot, who was flying alone; the other was a pedestrian. The crane was seriously damaged in the incident, but the crane operator was late for work, and so not in the cab as he would otherwise have been.

Here's the our members favorite photos of "Skyscrapers near London Borough of Lambeth". Upload your photo of St George Wharf Tower!

Going to St George Wharf Tower? Get answers from our friendly locals

Skyscrapers in London Borough of Lambeth